Making the Image: “A Whisper in the Water” » You Can Sleep When You're Dead: Blog by Colleen Miniuk 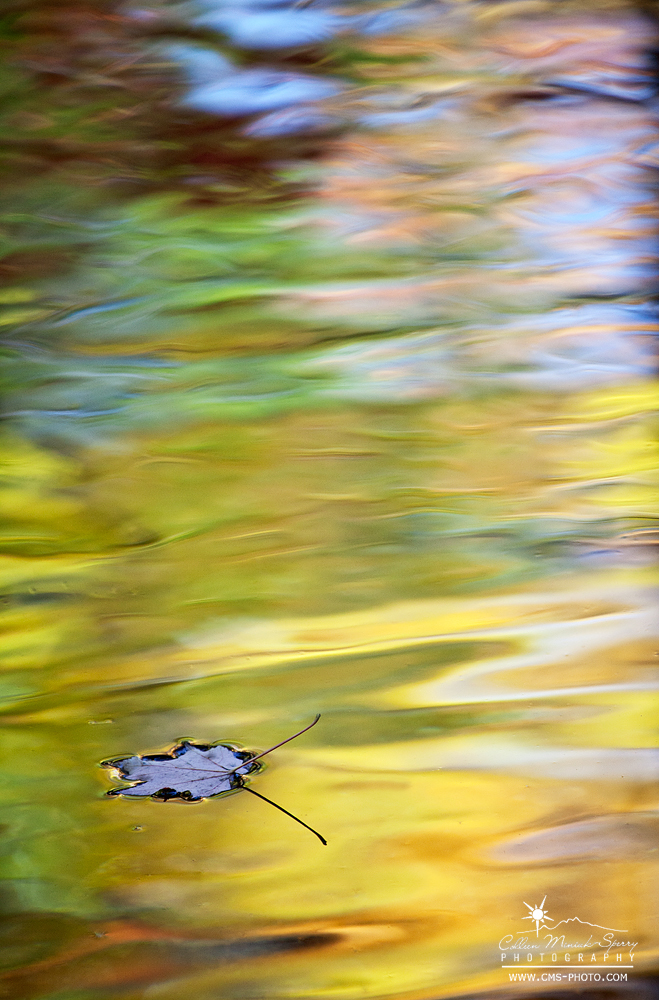 “A Whisper in the Water” || Jordan Stream, Acadia National Park, Maine (Prints available – click on photo to purchase yours!)

“Even if something is left undone, everyone must take time to sit still and watch the leaves turn.”  ~Elizabeth Lawrence

While Acadia National Park no doubt possesses grand beauty, I oftentimes find myself marveling (sometimes for hours and hours…) at the little details and moments that make the landscapes so special.  While sauntering along Jordan Stream on my final day in the park last week (on my most recent two-week stay), magical reflections dancing in a small pool absolutely entranced me.  Thanks to a variety of trees donning their fall colors beneath a blue sky opposite of where I stood, the palette of colors – reds, yellows, oranges, pinks, and blues – changed constantly on top of the water.  I could have watched this interplay of light and hues all evening, but I knew I had to make a photo of this!

As I put my 100-400mm lens on my tripod, I decided I needed a little faster shutter speed to keep the undulating water from rending too much motion in the final photo.  However, I was photographing underneath a canopy of trees (in shade) in late afternoon light.  In other words, I did not have a lot of natural light available.  That’s an easy enough challenge, but I also had a polarizing filter stuck on the front of my lens (for almost two years now; I have tried it all, it is not budging) which meant I would lose one to two stops of light as a result.

Considering my circumstances, I settled on my widest aperture of f/5.6 and an ISO speed of 1600, which yielded a 1/40th of a second shutter speed.  Not as fast as I would have liked, but I was not willing to bump my ISO speed to 3200 to get to 1/80th of a second.  With how slow the water was moving, in the difference between those two settings would have been inconsequential – and would have increased the noise/grain in the final image.

After snapping numerous frames of just the water reflections, I evaluated my results.  I liked the general concept of the wave movement, colors, and light, but in the end, felt the images lacked some structure.

As I observed the colors and patterns change, nearby eddy would occasionally push leaves into my composition.  Sometimes a clump of five or six would enter my frame; on a few occasions, only one would pass through.  As they would float by, I felt like they were subtle whispers or messages crossing momentarily through reflections.  I originally kept them out of my frame because I was not sure if I could render them sharp enough with my shutter speed.  I figured I would give it a shot (or two or two hundred) though…it’s only pixels after all.  And they put the Delete button on the back of the camera for a reason, right? Right!

At first, I tracked a few leaves using autofocus, thinking that would be the fastest way to ensure the leaves rendered sharp.  I missed a bunch of great opportunities as my lens kept zooming in and out, trying unsuccessfully to pick up the requisite contrast to focus on in the ripples.  So I returned to manual focus and tried to track the leaves with my camera as they’d cross my view.  But trying to focus while tracking on a tripod became a comical exercise.  I could not hand-hold the camera steady enough at 1/40th of a second to get a sharp image.  Generally, you want your shutter speed to be faster than 1/focal length of your lens to ensure sharp images while hand-holding the camera.  In my case, this meant 1/400th of a second or faster…theoretically, I could have increased my ISO significantly, but again at the expense of much grain.

Within the 70 attempts I made as various collections and individuals of leaves roaming through my composition, I managed to create the photograph of a single leaf (see above), one I titled “A Whisper in the Water” because of my emotional connection with it.  I really liked the lone leaf, as it conveyed more serenity and calmness than the groupings of leaves did – and helped express the concept of “whispers” I wanted to share.

2 Responses to “Making the Image: “A Whisper in the Water””