Behind the Image: NAU Guest Blogger – Rebecca Kooima » You Can Sleep When You're Dead: Blog by Colleen Miniuk 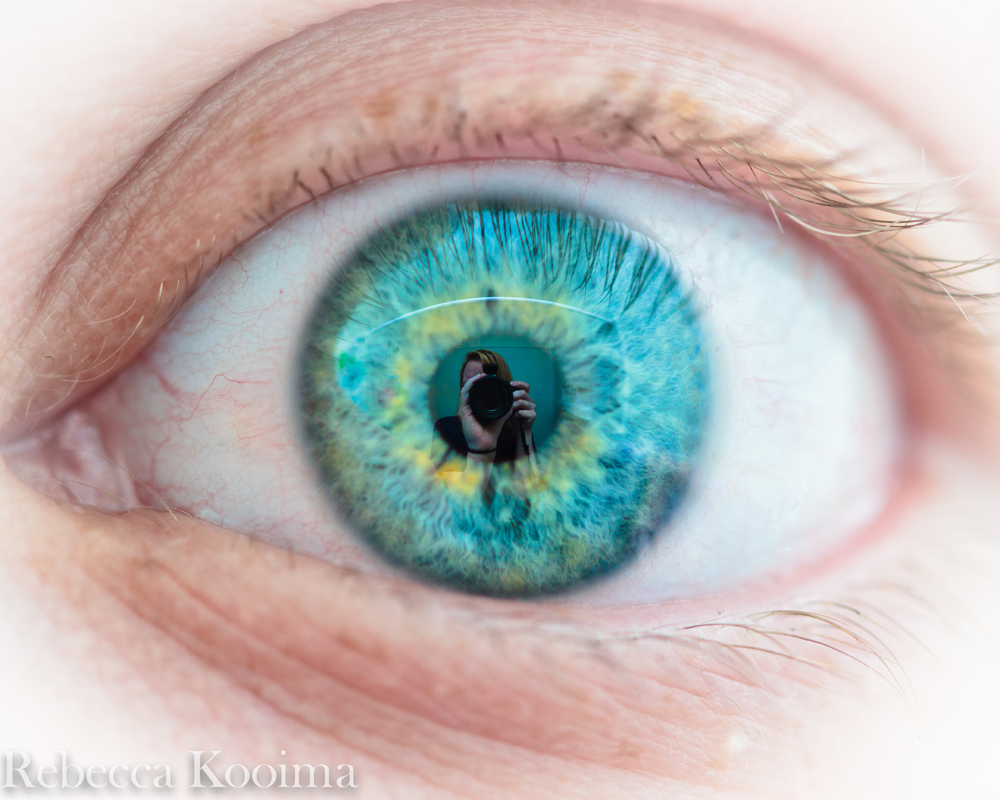 I love macro photography. In February, I received a macro assignment in my photography class and I took it as an opportunity to find something new to capture that I had not done before. After I searched online for inspiration, I was set on taking a photo of a paper clip in water, lit through blinds. If you have not seen this, you should search for a photo online, because it looks awesome. The blinds form a reflection in the water, and the paperclip bends the reflection. Sadly, when I made an attempt at the paperclip photo, I failed miserably, and as a result had to go back to brainstorming.

I eventually came up with the idea for a picture of an eye because I’ve seen so many that I like online. My roommate, Joy, who is a wonderful person, was kind enough to lend me her eye. In my first trial run, I managed to capture a photo that was decent, but I spent days going back to it, and just staring at it, because something just felt off. Eventually, I realized that what I saw in my head was much brighter. I also realized that the reflection of myself in her pupil would look better if it were more clear, and intentional instead of an accident.

A couple days after the original shot, my roommate allowed me to borrow her eye a second time. In order to capture the shot I had in mind, Joy and I squeezed into our tiny bathroom with the light from my room in there with us, I was also using an off camera flash to bring in even more light. While using the studio at the school would have been exponentially easier, it was closed during the times both Joy and I were available. The extra light immediately made a difference. However, in addition to making the image brighter, the light also made the reflections in Joy’s eye more noticeable, so to minimize them, I ended up standing in the shower. We then had to find the best place for the flash so that it didn’t look like something was exploding in her eye, but the amount of light was still ideal. The ideal position ended up being on top of Joy’s head, so she held the flash on her head while I took my final shots.

I used my Canon T2i with my 100mm f/2.8 Macro lens to capture the final image. The exposure of the image was 1/200 sec at f/3.2 and ISO 200. I made the iris more vibrant by using the Iris Enhancement tool in Adobe Lightroom, which boosts the saturation, brightness, clarity and contrast of the selected area.

About the Photographer:
My name is Rebecca Kooima and I am currently a senior Exercise Science major at Northern Arizona University. I hope to one day go on to medical school, which has nothing to with photography. However, photography does provide a creative life to my otherwise science filled life. I discovered my love for photography in high school with my first point and shoot camera. That love led me to take classes at NAU to challenge and improve my photography. I love macro photography and being able to show people the tiny details they ignore in every day life. I also enjoy nature photography, and the journeys that accompany it.

2 Responses to “Behind the Image: NAU Guest Blogger – Rebecca Kooima”