Behind the Image: NAU Guest Blogger – Clark Malcolm » You Can Sleep When You're Dead: Blog by Colleen Miniuk 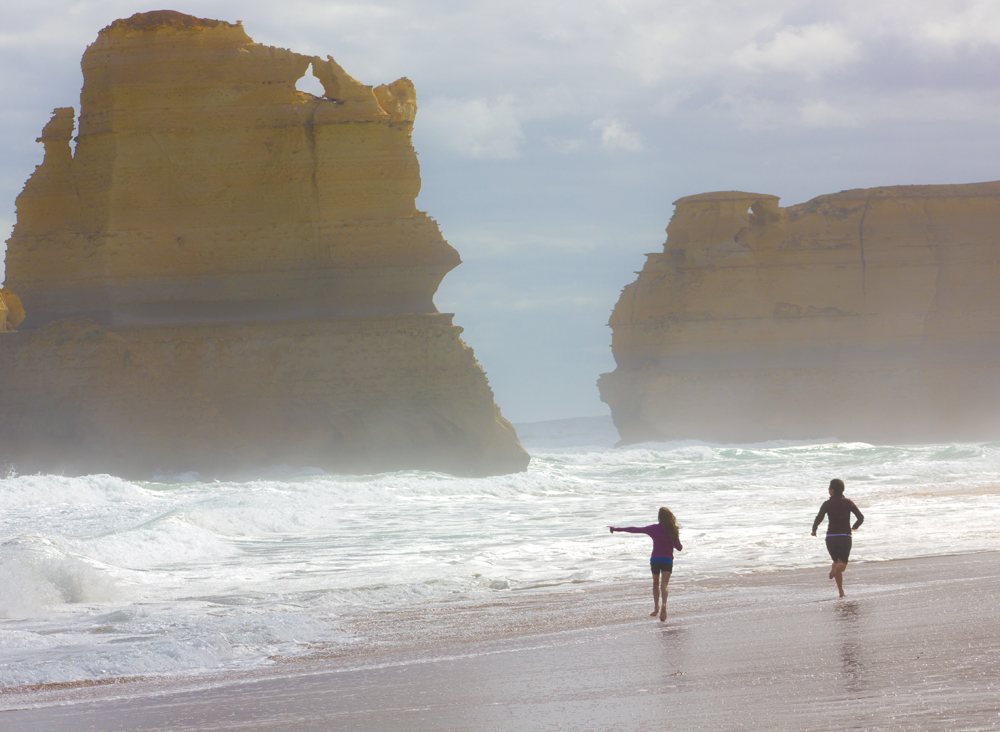 “Look, Mom!”
Kangaroos, Koalas, $10 beers, plastic money, too much currency in coins, and immaculate beaches are the main things I took from my recent trip ‘Down under’.  My last spring break in college was spent on a whirlwind adventure across the globe that included 48 hours of travel (including a seven hour layover in the San Francisco Airport), seeing and eating kangaroo, a mock United Nations conference, and one beautiful day touring the Great Ocean Road outside of Melbourne, Australia.

This photo was taken on that one amazing day that we spent cruising from one pristine beach to another as we drove along one of the southern most roads in the world, The Great Ocean Road.  One of our last stops was easily the highlight of the tour as we descended upon 500 Steps Beach, which was right next to the ’12 Apostles.’  The 12 Apostles, although there are only 8 left, are massive chunks of Australian land that have been separated from the main island by thousands and thousands of years of the Antarctic Ocean pounding it.  The towers of sandstone all stand at least five stories tall and vary in shape from extremely skinny to ones that look like they could, and would, have a multi million-dollar house built on top of it were it on the California coastline.

The two runners shown in the bottom right of the photo are mother and daughter, Dr. Gretchen Gee and her daughter Petra Gee.  Dr. Gee is our professor who came with us as the faculty advisor to our trip and was definitely the ‘mother’ of the group of 18 to 22 year old NAU students sent to participate in the 22nd annual Harvard World Model United Nations conference.

The beach was literally a gold mine for photographers as the piercingly blue Antarctic Ocean came crashing against the apostles one after another.  On the right side of the picture was a 100-foot cliff that lined the entire beach.  The photo was taken right as we got onto the beach and Dr. Gee and Petra began to run up and down the beach, taking in the salty air, sand beneath their toes, and amazingly beautiful view 360 degrees around us.

There was a bit of editing done to the picture in light room.  I increased both saturation and vibrance to give the rocks, sky, and ocean a brighter more vivid color.  I tried turning the image to black and white but the colors in the image really made it pop.

There were literally a TON of images I loved from my trip but the bond between mother and daughter shown in this image, along with the natural beauty of the Australian coast really drew me into this image.  I hope you enjoy it and look forward to any feedback you may have!  Thank you!

About the Photographer:
My name is Clark Malcolm and I am a senior at Northern Arizona University studying political science and photography.  I was born and raised in San Juan Capistrano, California where my parents still reside.  I have been interested in photography from a young age as my Dad always had his camera with him.  I began studying photography in high school where I took a film course.  I really enjoyed developing my own film as it had a very authentic feel to it.  Capturing people within my images is definitely my favorite aspect of photography.   When an image is able to capture an individual in a certain moment or emotion it adds another dimension to the image that cannot otherwise exist.

One Response to “Behind the Image: NAU Guest Blogger – Clark Malcolm”