Amy Minton was one of three students on the “Winter in Acadia: A Creative Photography Retreat” held on the scenic Schoodic Peninsula in Acadia National Park, Maine, from February 7-13, 2016.  This blog post features her thoughts and images from her experience.  If you have enjoyed seeing Acadia through her eyes, please leave her a comment on her post!  More of Amy’s work can be viewed on her website at www.amymintonphotography.com.

Winter is a beautiful time of the year and offers many opportunities for outdoor photo shoots.  My camera, however, hibernates in winter.  Well, at least that was the case before I participated in Colleen’s workshop, “Winter in Acadia:  A Creative Photography Retreat,” this past February.   By the end of the workshop, I was very happy that I took my camera out of hibernation and returned to Acadia National Park.  Now, not only do I possess confidence to shoot outdoors in winter (and in fact have done so – post-workshop), but also I learned about the creative process and its influence on my photography as well as history, geology, and wildlife within and around Acadia National Park.

This image was made on a very chilly morning (-17 wind chill), which may be the reason why I wanted to create an image with this lone tree located near the Blueberry Hill Parking Area.  To me, loneliness feels “cold,” and at the time, despite being appropriately dressed for the winter conditions, I was cold.  So, while standing there, I imagined that this tree was also feeling alone during the cold sunrise as it looked out toward the other trees on Schoodic Island.  I wondered if the tree longed to join the other trees on the island, or maybe it wanted to invite the trees to join him on Schoodic Peninsula, a.k.a. “the quiet side of Acadia.” 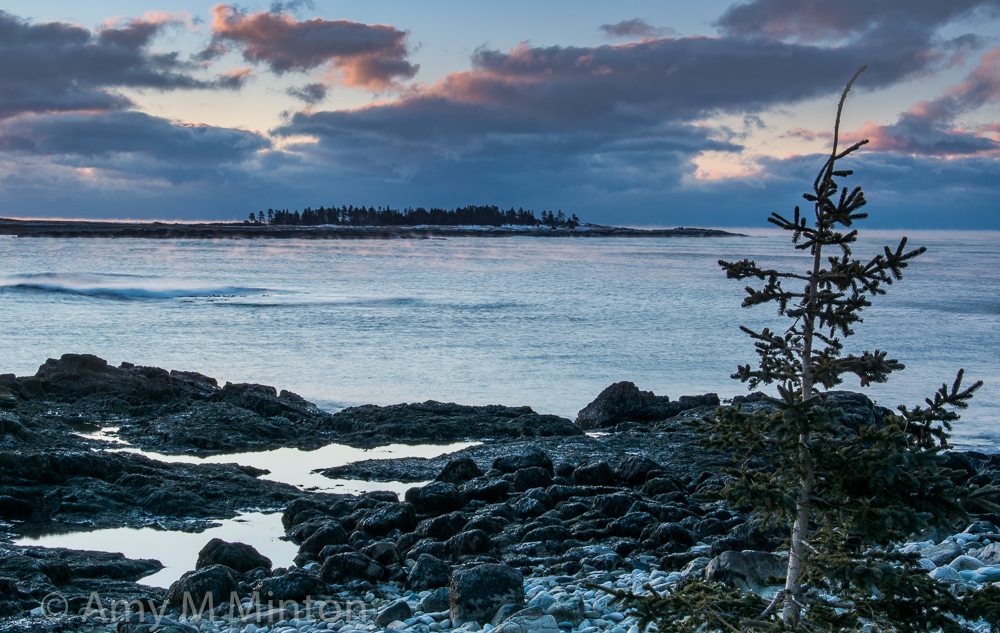 Face of Otter Cliff.   I usually don’t think of a title for an image when at a location, but while at Boulder Beach (Acadia National Park, Mount Desert Island) the snow and ice coating the rocks at Otter Cliff appeared to reveal a face.  At time, I wondered if it was only during the winter season that the face is exposed.  If so, then add it to one more experience of the unique beauty of Acadia National Park in winter.

The harbor seals in this image were spotted resting, presumably on a rocky outcropping exposed at low tide, in Wonsquak Harbor.  I am sharing this image because it represents one of the many forms of wildlife that was seen during my photo adventure.   In addition to the harbor seals, I watched a seagull drop, while in flight, drop a mussel onto the road in order to crack the protective shell, and then, gain access to the mussel inside (I had never seen that before).  There were also a variety of mammal and bird tracks in the snow, but the “coolest” tracks, in my opinion, were the river otter tracks.  Despite not actually seeing the river otter(s) (unlike the workshop participants the week before my group), I thought it was amazing to see the paw prints in the snow and then see where the otter slid on it’s belly on top of the snow.  It still makes me smile when I think about that river otter running along the snow and then sliding on its belly before he reached the waters edge and began to forage for food.  I suspect the river otter made a game of it along his way. 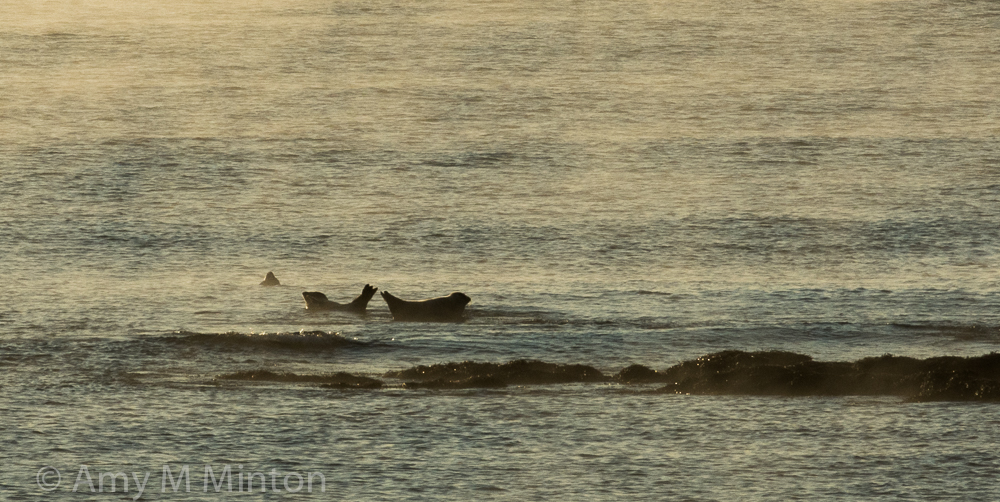