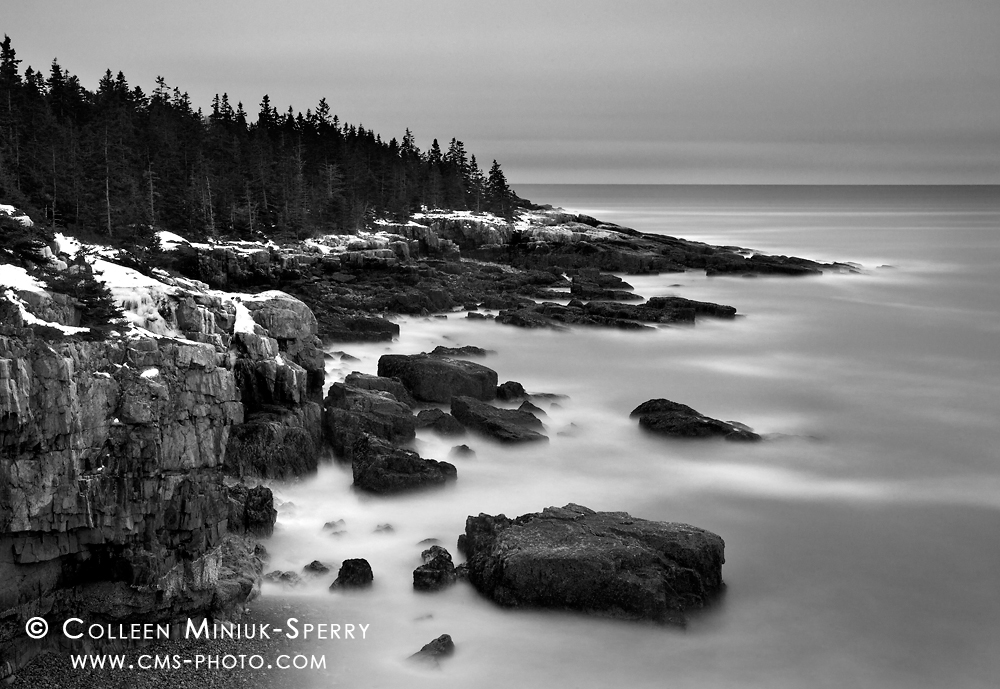 Day 1: “In the Storm,” waves roll into the Schoodic Peninsula’s rugged western coastline in Acadia National Park, Maine (Prints available for purchase – click on photo to order yours!)

If you have spent any time on Facebook in the last several months, chances are high you have run across the “Black and White Challenge” making its way from photographer to photographer.  For those unfamiliar with this social media experiment, it goes something like this:  Post a black and white photograph on your Facebook page each day for five days.  Then, challenge someone else to do the same each of those days.

Although I enjoy viewing monochromatic images (both in general and during the recent Facebook challenge), I had not thought about black and white processing for my own work for quite some time.  About 11 years to be exact…

Humble beginnings: I made this image in the fall of 2001 (from my 7th roll of film). I knew little about light or composition at the time, but I really liked how the light illuminated the logging wheels while the fog cleared from the hills in the background at my husband’s childhood home outside Missoula, Montana.

To escape the stresses of intense corporate life, I began taking photography courses at the Chandler-Gilbert Community College in September 2001.  Through my five semesters of classes (until the end of 2003), I learned what an aperture was, how to slow my shutter speed, ways to compose effectively, and many other foundational techniques.  I also vividly remember learning that a black and white image should possess a bright white tone, a rich black, and a nice range of greys in between (the lack of such combination being one of the reasons some high dynamic range, or HDR, images fail, in my opinion…but I digress).

Eager to expand my photographic repertoire, in late 2003, I tried my hand at color slide film.  I instantly found shooting in color helped me better express what I loved about what I saw and experienced in the outdoors.  Despite the lingering and unforgettable fumes of stop bath and fixer trying to tempt me back to the darkroom, I chose to pursue my work in color…and as a result, the few remaining rolls of black and white film I owned aged well beyond their expiration date in my refrigerator.

Fast forward to this past October.  During the Black and White Challenge on Facebook, my good buddy and talented photographer, Floris van Breugel nominated me to participate.  Since then, I have scanned my collection of images, experimented with many in the digital darkroom, and finally selected five to offer to the challenge (and in the process, remembered just how fun it was to watch your photograph come to life in the darkroom trays while chit-chatting with your photographer friends.  It was kind of like sitting around a warm campfire, only without the s’mores and tequila…). While I am a little late in joining this party, as the idiom goes, “Better late than never.”

With that, my first contribution to the Black and White Challenge is “In the Storm” (image atop this post) from the Schoodic Peninsula in Acadia National Park.  This past February, while making my standard rounds along the western shoreline in the late afternoon light, I reconnected with one of my favorite views.  I had high hopes that the fast-moving winter storm would break into a magical fiery sunset just after the sun disappeared behind the horizon.  As I waited, I played.

Specifically, I experimented with various shutter speeds to render the waves kissing the rugged cliffs into an ethereal mist.  To do so, I slowed my exposure settings down as much as possible:  ISO 50, f/22 at 30 seconds.  I also added a three-stop graduated neutral density filter over the top portion of my frame, so as to darken the clouds and to pull some additional texture out.

When I looked at the results on my camera’s LCD, I enjoyed the composition and the idea of moving water.  I felt, though, as if the motion effect (even at 30 seconds) was still too fast for what I envisioned.  I turned to my Lee 10-stop Big Stopper neutral density filter to help me slow my shutter speed even further.  I set the final exposure to ISO 50, f/22 at 502 seconds while using the Big Stopper filter in front of my lens.  Here is the original color image (post continues after the photo): 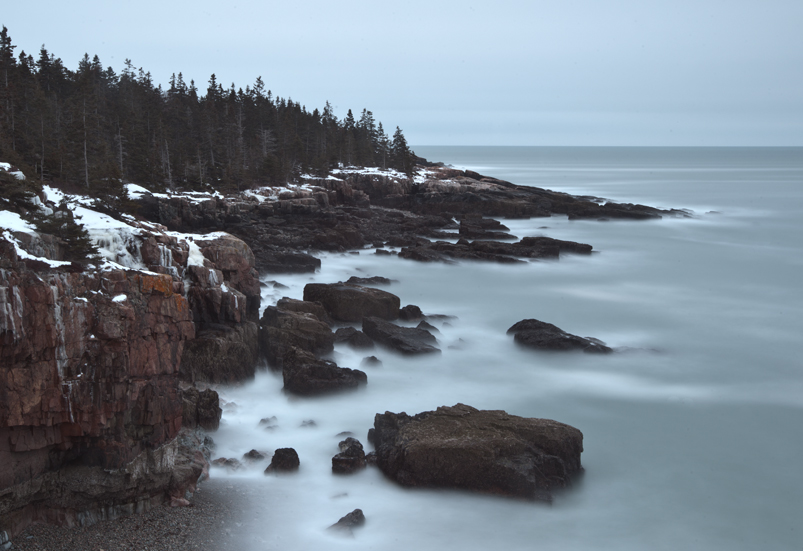 The original color image of “In the Storm”

When processing the photo on the computer, I decided the colors were not important to me conveying my desired message for this scene.  On top of that, the even, diffused lighting lacked contrast and perhaps a little shape.  In technical terms, it looked blah.

As we review in many of my workshops, if it’s not helping your story, take it out!  I eliminated the color tones and increased the contrast through a series of spot-specific Level adjustments (like burning and dodging to achieve “a bright white, rich black, and a range of greys in between” in the traditional darkroom).  While blue hues typically feel cold, I believe the image took on a sharper, even colder feeling, once I dropped the gloomy color out.  Also, the increased contrast the black and white image displays offers the illusion of greater dimension and shape than the color version.

Do you agree?  Which version of this image do you prefer and why?  I’d enjoy hearing your thoughts in the Comments section below.

To fulfill the requirements of the challenge – and in honor of my Chandler-Gilbert Community College days – I nominate my dear CGCC friends on Facebook to participate:  Mona Burato, Patty DeBermuda, and Lynn Welter!  Let’s see what you’ve got, ladies!

2 Responses to “Day 1: The Black and White Challenge, “In the Storm””