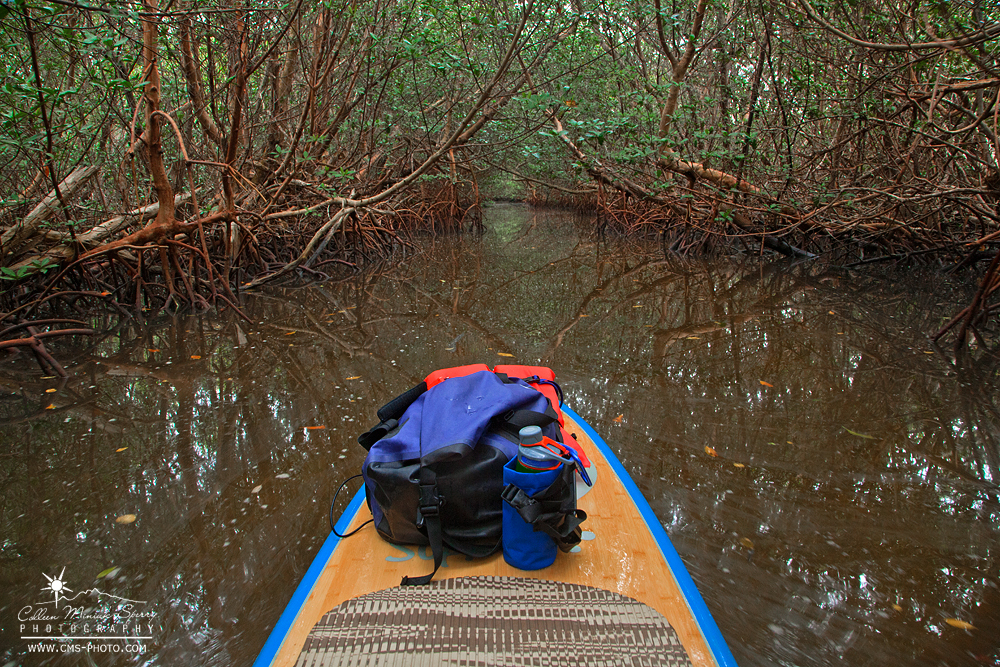 Paddling among the mangrove forest on the Buck Key Paddle Trail off the shores of Captiva Island, Florida

My toes curled tightly around the cool, white grains of soft sand as I looked to the angry inky clouds to the south.  Not again, I thought, shaking my head.

I apprehensively scanned the perfectly still, cerulean backwater bay to the east of Captiva Island.  Ruminations of my past felt as heavy as the muggy Florida air I now breathed. Only five weeks had passed since my mom and I frantically clung to life, paddling with all our strength and spirit through unexpected stormy six-foot swells on Lake Powell in Utah.  Staring into similar threatening conditions, I was hesitant to offer history such a hasty repeat invitation, especially during my first time climbing back onto a stand-up paddleboard since that harrowing event.  But my anxiety about the weather could not drown my enthusiasm to paddle in unfamiliar territory.

The cordial, clean-shaven 30-something-year-old attendant at the water sports rental hut at the ‘Tweens Water Inn broke my trance. “Let me check the weather forecast for you,” he said while spinning around to meet his computer’s keyboard.

“Heavy rain in 30 minutes,” he yelled back after a few seconds.

I slowly touched my red rain jacket and black waterproof pants, which hid my new black two-piece swimsuit. I dressed to get wet—rain or shine.  My concerns stirred elsewhere.

“What about wind?” I asked while stroking my chin and staring at the summoning sea.

“Nothing significant, just four-to-five miles per hour all afternoon,” he calmly responded.

“If the wind kicks up, does this bay see big swells?” I asked stoically, trying to learn more about the Buck Key Paddle Trail—an aquatic path I had never paddled on before.

“Not really, this area is pretty protected by Buck Key,” he said, pointing to a mangrove-covered strip of land across the narrow Roosevelt Channel.

“If I go out for 30 minutes and the weather gets really bad, what happens?” I continued without changing my gaze.

“You’ll get wet, but who cares? If you make it to the trail, you can hide out there until whatever happens passes.”

My eyes widened as a devious smile grew on my face. Like a pirate or rum-runner trying to outrun authorities (including the most dominant powers of them all—Mother Nature’s hurricanes), I too could find a safe haven in the sinuous waterways lined by twisted gangling mangrove roots. Perhaps history and I could play together nicely after all this morning.

“Let’s do this then!” I responded with a sharp clap of my hands.

He nodded with a grin equal to my own. While I filled out the legal paperwork, he effortlessly pulled a long stand-up paddleboard off the rack of many and then positioned it partially in the water to ease my launch from the gently sloping beach.

As I looped the board’s bungee cord over my large purple dry bag to secure it to my rented board, I looked up at him, “Soooo, how about gators?”

“Am I going to run into any out there in the bay or on the trail?”

“There’s a three-foot gator that’s been sunning himself in the bayou. You might see him before you turn right into the trail.  Here’s a map.”

“Do you know if he’s had breakfast yet?” I asked only half-jokingly as I tucked the laminated trail map under my dry bag.

He laughed but did not respond.  Nervously, I then added, “Here’s hoping so. Otherwise he’s going to have a yummy side of granola and peach yogurt with his six-foot tall human main course today.”

Kneeling on my board, I submerged my paddle and pushed the island’s beach away from me to start my two-mile journey under overcast skies—and more importantly, no wind.  However, with the line of dark clouds approaching, I swiftly headed to the lagoon’s entrance a half-mile away, paying little attention to the immaculate mansions and the old dilapidated boats (apparently used only by resting and grooming cormorants and anhingas) lining the canal.

When I arrived at the narrow opening for Braynerd’s Bayou, I balked. An unsettling three-foot wide cut beneath a canopy of eight-foot mangroves offered entrance to the Buck Key Preserve—and the water trail I was to follow.  I shuddered and thought to myself, “Where did he say that gator was?”

I inhaled a healthy dose of courage with the salty sea air.  I exhaled fear, hoping the nascent light breeze would carry it away.  Goosebumps emerged on my arms and legs, though I could not tell if my irrational worries or the chilly winds (or both) were the sneaky culprits. 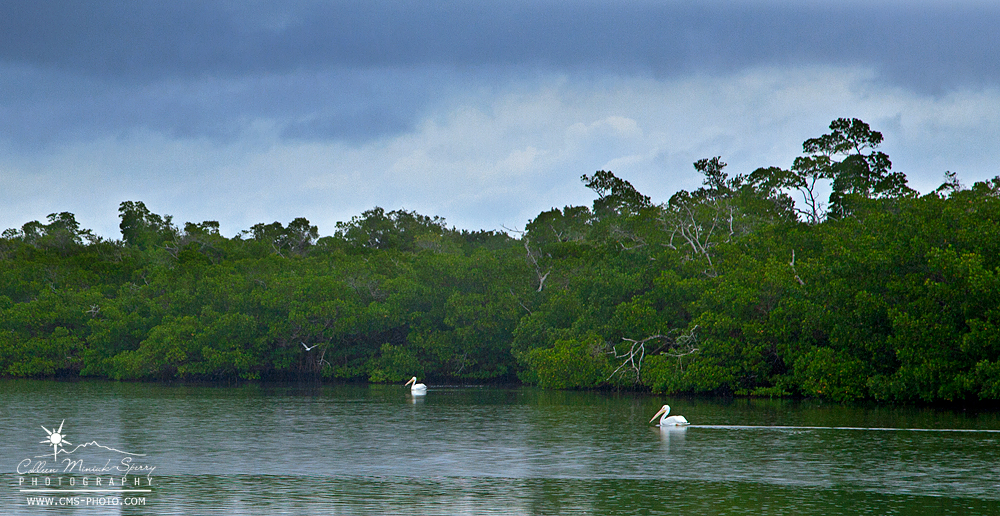 Pushing the opaque waters away from my board, I propelled myself a short 100 feet before the tree tunnel gave way to an open sky and a storybook tranquil cove. Brown pelicans flew overhead in a clumsy V-shaped pattern. American white pelicans floated like graceful swans. An occasional splash from a mullet leaping into mid-air reminded me of the unseen underwater world no doubt bustling under my feet. A chirping osprey overlooked this magical outdoor kingdom while roosting on his dead-snag throne like a somber-faced gargoyle warding off evil spirits. 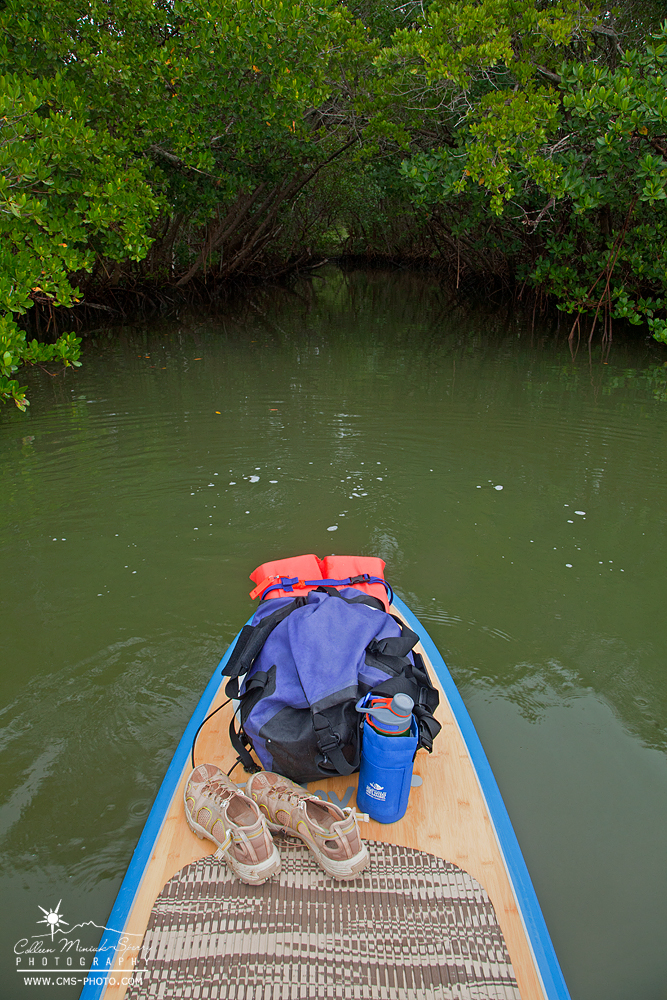 I stopped paddling in hopes of traveling unnoticed in this exotic bay, but a subtle current pulled me closer to the northern edge of the bayou where the official canoe/kayak trail supposedly began. When I drifted in front of a small, cave-like opening in the mangroves, I searched for a trail sign or marker, anything that could help answer my anxious psyche’s question, “You really want me to go in there?”

Unintentionally splashing my feet with drops of tepid water, I swirled my board around with strong backwards paddle strokes to survey my scene from left to right in search of a better option—and to spot that three-foot creature lurking somewhere around here. Along the western shore, I spotted a dark, long object. Gator or deadwood?  I was not about to paddle over there to find out.

Without any effort of my own, the beckoning waterway’s swirling flow rotated my board 180-degrees to allow me to confront the trail’s intimidating entrance once again. I snapped a few pictures of the watery “trailhead” as teasing raindrops started tapping the water’s surface. I extended my arm and turned my right palm face up toward the unleashing sky to feel the soft drizzly dance against my own skin. I took another deep breath, filling my lungs with the earthy, rotten-egg aroma of the mangrove forests now enhanced by the onset of rain.  I grinned.  Time to play pirate.

I dropped to my knees to avoid hitting my head on the low-hanging lanky branches hugging the waterway—and to prevent me from falling off my board into the three-to-four-feet of mangrove muck.  As I slipped into the trail’s grasp, I instantly felt transported to the Dagobah System from the Star Wars movies. Yoda could have dropped out of the trees without startling me.

I alternated paddling and pushing myself off the reddish-brown roots dipping their toes in the brackish six-foot wide channel.  As I snaked through this sheltered dreamlike hideout, I studied Buck Key’s sandy uninhabited landscape veiled behind the wall of green. I contemplated whether I could survive off this land as well as the Calusa Indians once had among their shell mounds. Shy mangrove crabs scurrying among the branches indicated these little critters obviously could prosper here. I wondered if the pirates and rum-runners paused for even a second from their illicit business to appreciate the incredible beauty of their temporary surroundings similar to these. 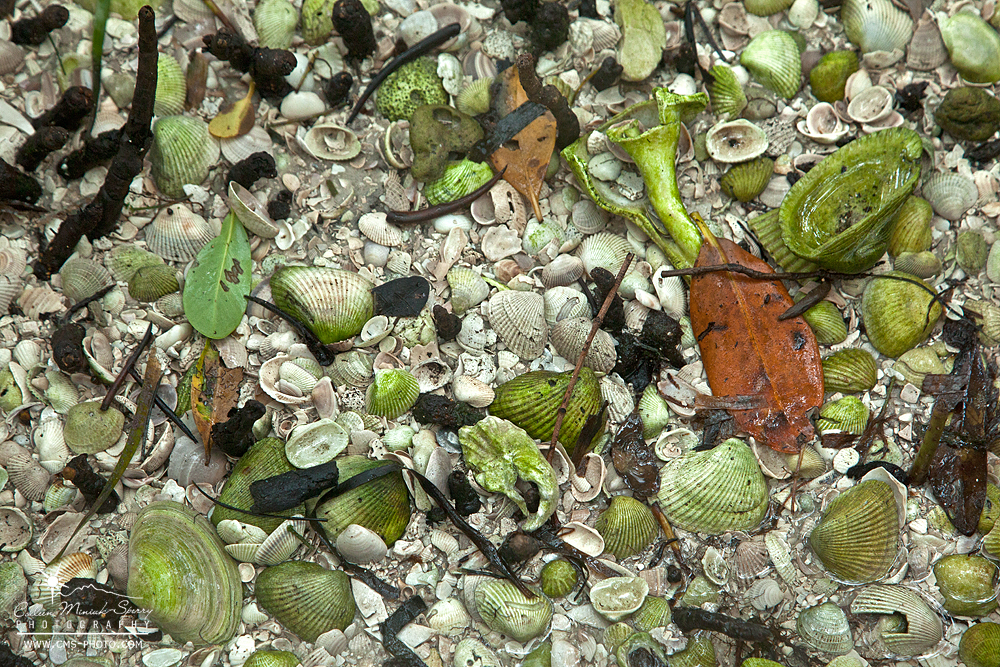 After a little more than a half mile of paddling, the shaded waterway greeted the undulating waves of the expansive Pine Island Sound. As if to tempt me to remain in the trail’s dry confines even longer, an elegant great blue heron swooped from one branch to another close enough for me to hear the flap of its wings slice smoothly through the sultry air. Imagining my good fortune could not get any better, within seconds, a giant eagle ray jumped out of the channel waters, flashing his black-spotted body and bleach white underside to the emerging sun—and to me gazing in awe a mere 100 feet away. I closed my eyes and shrugged my shoulders to curl around the warm, welcoming northerly breeze. I counted my many treasures from this experience. I liked being a pirate. 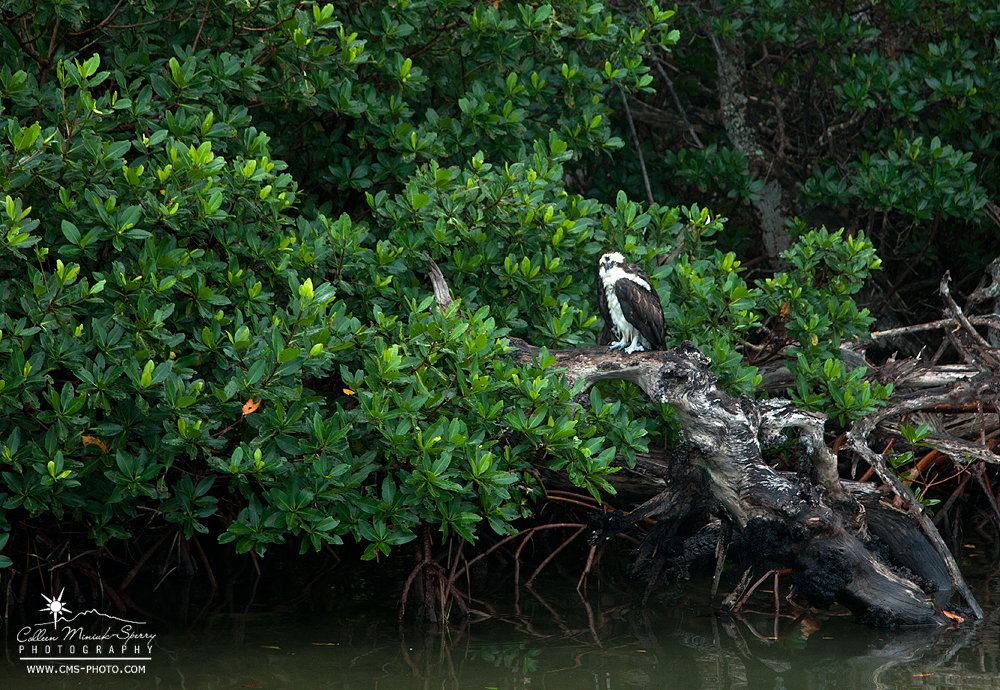 A juvenile osprey rests on a twisted mangrove branch – spotted en route back to the hotel’s marina.

With the fast-moving current threatening to push me quickly back into Buck Key’s embrace, I stood up on my paddleboard and shook the stiffness from my folded legs before digging my paddle into the sea to return to my hotel.

As I approached the resort’s marina, the same sun-tanned gent who had helped me launch earlier appeared from the rental hut with a friendly smile.

“Fantastic! The gator was apparently full!” I joked as I slid my board into the beach. “Seriously though, paddling through the tight canopy of a mangrove forest was so different than anything I’ve ever done. I’m from Arizona, where I’m used to paddling under big open landscapes where you can see forever.”

He nodded his head as if he understood.

“Were you fine in the rain?” he asked.

“What rain?” I responded, then slyly smiled and started humming Disney’s popular Pirates of the Caribbean song to myself, “Yo ho, yo ho, a pirate’s life for me.”

Many thanks to the Lee County Visitor & Convention Bureau and the ‘Tween Waters Inn Island Resort and Spa for hosting the Outdoor Writers Association of America Board of Directors and Officers during our winter board meeting activities this past January.  Their outstanding support made this adventure possible.  If the thought of floating gently through a tunnel of green, communing with wildlife, and savoring the ocean air entices you, you won’t soon forget a paddling trip (via canoe, kayak, or stand-up paddleboard) from Captiva Island!  I can’t wait to return…

The Outdoor Writers Association of America awarded this blog entry Second Place in the “Outdoor Fun & Adventure” category in the 2017 Excellence in Craft awards. 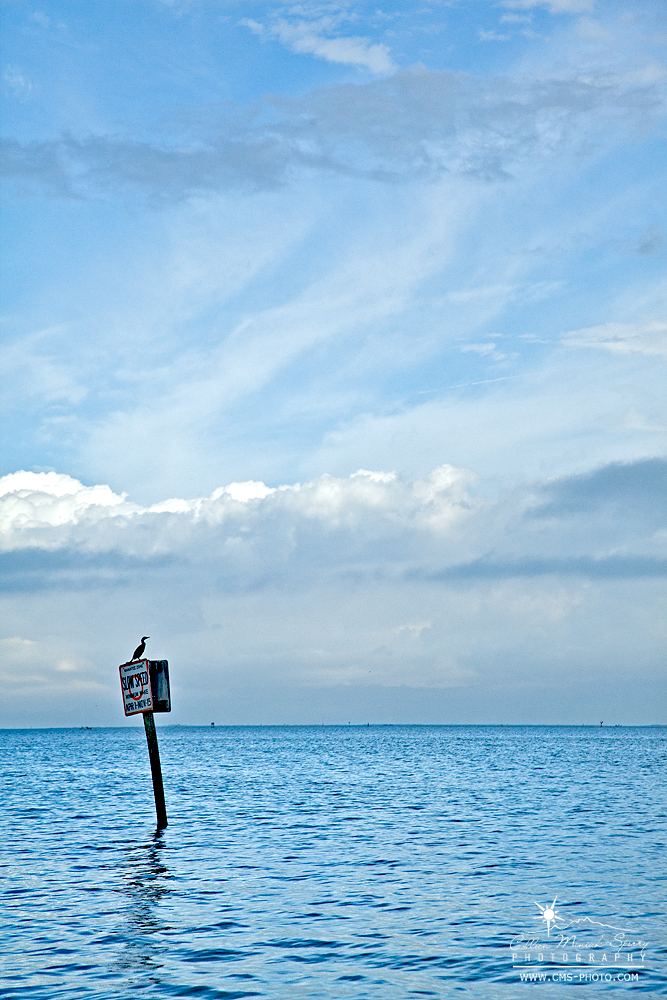 View of Pine Island Sound from the Roosevelt Channel