The Path of Totality » You Can Sleep When You're Dead: Blog by Colleen Miniuk

Last Monday, unlike millions of people, I was not in the path of totality for the highly anticipated solar eclipse. Instead, I found myself sitting alone by choice (well, save for the seagulls) in my favorite place, the Raven’s Nest in Acadia National Park, Maine, where forecasters estimated the moon would only cover the sun at 50-60% at its peak.

I had no intentions of photographing the solar eclipse, wanting instead to soak in the entire experience as it happened in the place where my own path had led me. There were few noticeable changes in the seagulls squawking, the outgoing tide splashing, or the gentle sea breeze stroking the pines when the moon started making its move on the sun. In fact, if you didn’t get the memo about the eclipse or didn’t have those goofy-looking special magic glasses–things the Wabanaki Indians (natives living on this land for an estimated 12,000 years) obviously lacked–you might not have known something different in the universe was even happening. Until just before the peak. 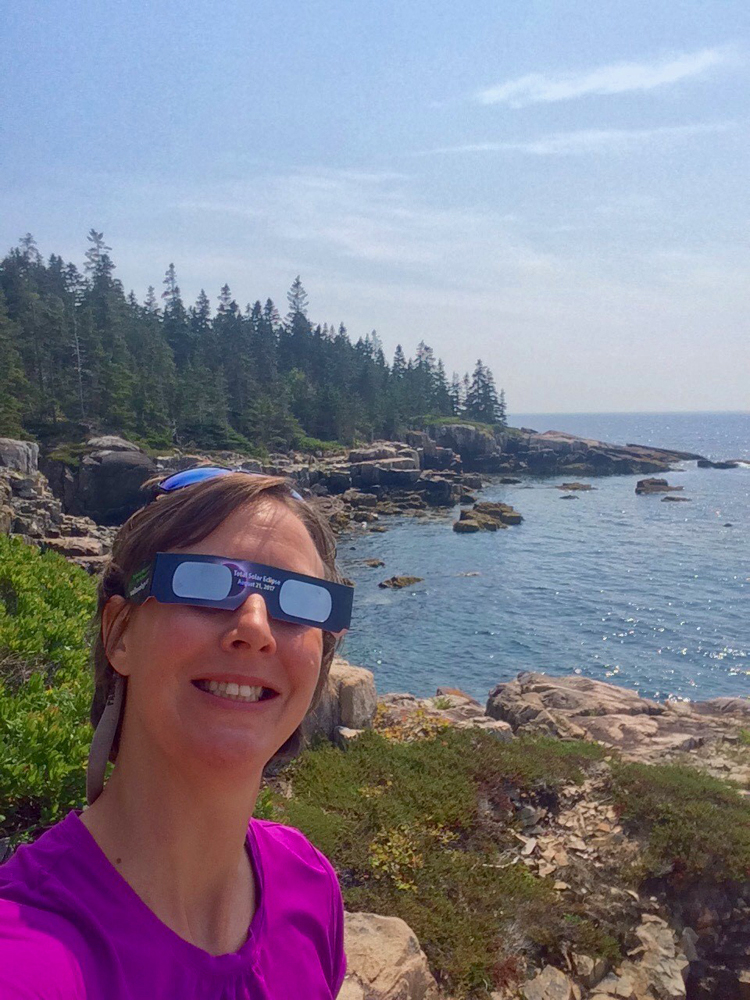 Ready for the solar eclipse on the Schoodic Peninsula’s western shore in Acadia National Park, Maine

At about 2:30 p.m. EDT, the wind held its breath. The waves stilled, settling one-foot swells into a sheet of navy blue-stained glass. The normally sherbet-colored granite cliffs suddenly turned silver. Only the seagulls ongoing squeals indicated that time, life, the movement of the Earth had not momentarily stopped.

As if to simply prove to myself that I could still move, I stood up to make a photograph with my telephoto lens through my eclipse glasses. Mind completely blown. I then decided to make a picture about every five minutes from that point on. The above is what resulted, a composite of 16 images from just before peak to conclusion. I know it doesn’t show the prized totality, the Baily’s beads effect (the “Diamond ring”), or differ than all the other partial eclipse photos ever recorded. But I howled joyfully like a coyote after every frame, and for me, that’s all that matters.

The next day, I repeated this moment on Raven’s Nest at sunset. Seagulls chattered, the cobbled clapped in the outgoing tide, the sea breeze stroked evergreen branches. I peered (through my protective glasses, of course) at the now naked sun, shining in its full glory. The waxing crescent moon now smiling, smugly almost, as if it was proud of itself for the commotion it had caused the day before. I wondered how many other people of the millions who experienced the eclipse yesterday had bothered to sit and enjoy today’s ephemeral moments? I felt so grateful that I have the freedom to taste, enjoy, and appreciate the natural world essentially any time I wish. Others, through circumstance or choice, are not so fortunate.

Sarah Gilman wrote an eloquent essay recently, which summed up my sentiments perfectly: “How would we come to understand our world if we learned to turn this attention on its everyday wonders? What would we save from our own ravenous appetites? If hordes of people pulled off the highway randomly to stare at an old growth Douglas fir, if they did it to watch the way a stream carves through a canyon, or even the way a swarm of flirting gnats become a galaxy when lit by a sunbeam?”

There’s big hype for the next solar eclipse throughout Maine, for on April 8, 2024, the path of totality will split the state in half.  In a place where I already spend two to three months a year, I have a feeling I know where I’ll be then. Maybe I’ll photograph it. Maybe I won’t. I’ll decide how to celebrate yet another fleeting moment, as I did on Monday and all days, precisely when it happens.

And that, I think, is living life, not just a single moment, in the path of its totality.

2 Responses to “The Path of Totality”