Stephanie Austin » You Can Sleep When You're Dead: Blog by Colleen Miniuk 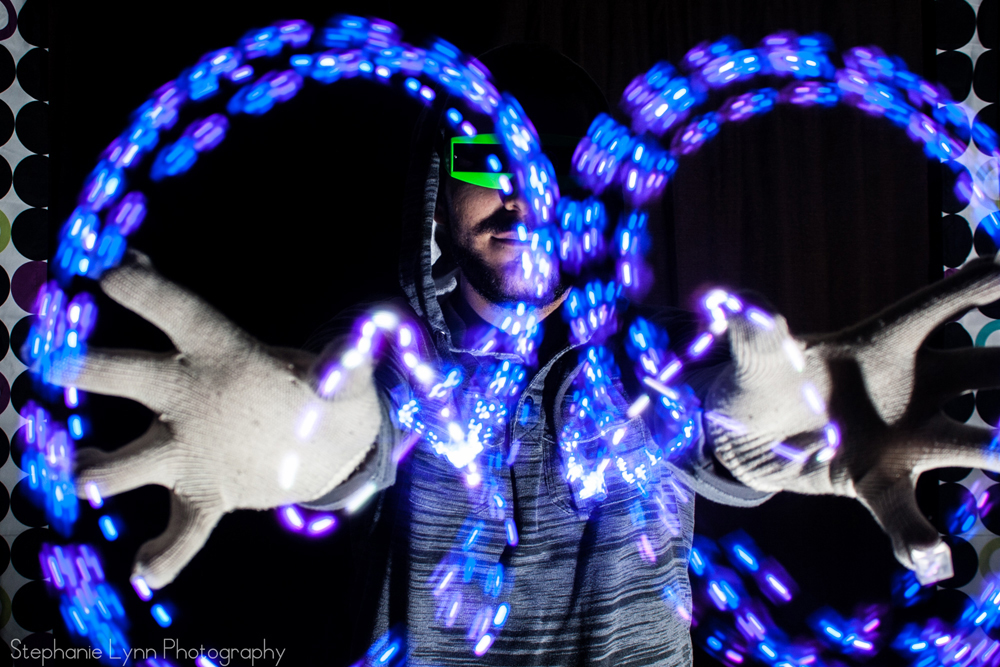 As someone who has been interested in photography from a young age, I always enjoy a challenge and forcing myself to think outside of the box. When my photography teacher gave us the assignment “Painting with Light,” she showed us images of people using flashlights to create shapes or to illuminate their subjects. I wanted to create an image that did both. I had experimented with the concept before in my high school years, but I was unsatisfied with the results and had not thought to retry the technique since. As the teacher continued to show the class different examples of the technique, my wheels were turning. By the time class finished, I had already planned exactly what elements would be a part of my image.

Just over two years ago, I had my first exposure to a rising party trick—gloving. Using gloves with rapidly flashing LED lights inserted at the fingertips, people can create a light show that, paired with the right music and movement, can put viewers into a hypnotic state. When I first met Jordan, it was at an ecclesiastical function. I remember walking in to the gym with my friend, the beat of the music pulsing through our bodies. When we entered the room, I immediately became aware of the flashing lights that on my left that seemed to be moving in sync with the music. At first, I assumed they were a part of the ambient light, maybe a disco ball or something. Upon closer examination, I came to realize that there was actually a person manipulating these lights.

Jordan has worked with the art of light for about 5 years now. His light shows have always been a party staple, one that catches the attention of many. When my photography instructor gave us the assignment “Painting with Light,” I immediately thought of the shapes and displays that Jordan made while demonstrating this talent.

We soon after collaborated to create our “Painting with Light” image. To capture the exact image that I had pictured, we ended up trying this technique two separate times. On the first go, I did not have an exact game plan for how I would execute the photo, but I had an idea of how I wanted the image to turn out. Not only did I want to capture the movement of the lights, but I also wanted Jordan’s face illuminated. I had hoped that the lights from his gloves would be enough to illuminate his face, but we quickly discovered that this would not work. After enlisting the help of my external flash and about 200 frames later, I had finally captured an image that I was almost satisfied with.

On our second meeting, we both had a little better of an idea as to what we needed to do in order to achieve the exact look that we wanted. After setting up a studio in the apartment of my front room, we got to work. We found that the exposure could be no longer than 2 seconds; otherwise, the movement of the lights would take over the image and make it difficult to see who was in control of the lights. We also found that it was better to illuminate the external flash at the end of the exposure. This allowed the camera to capture the light trails that Jordan created, and the flash acted to illuminate his face and hands.

For this image, I used my Canon Rebel XS. My shutter speed was set for a 2-second exposure, with an f/stop of 5.0, and an ISO of 100. When the exposure began, Jordan would start creating shapes, and I would manually activate the external flash to illuminate his face. In post processing, I made some changes to the exposure and boosted the contrast. I also made sure that the background was dark where it needed to be and that there were no unnecessary light spots on the background.

About the Photographer:
My name is Stephanie Austin; I am a photography minor at Northern Arizona University in Flagstaff, Arizona. I really discovered my passion for photography in my early high school years. From a young age, I had always found joy in using my mother’s camera to take pictures at different functions. However, I had never really thought of using photography as a form of art until I enrolled in a photography class my freshman year of high school. From there, my love for photography has only multiplied. I have always enjoyed photographing people and their interactions. Some might even label me as a people watcher. In recent years, I have turned my focus to photographing the beauty and mysteries of nature and the world around me.

To see more of my work, please visit my Facebook page: www.facebook.com/stephlynnphotog