silhouette » You Can Sleep When You're Dead: Blog by Colleen Miniuk 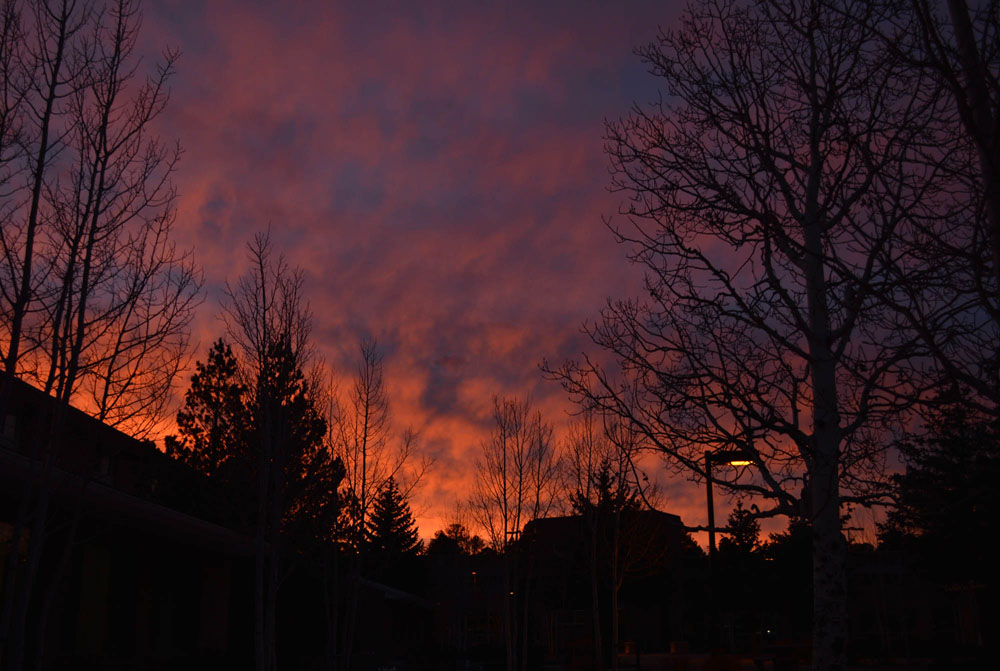 “Cotton Candy Skies”
I was inspired to create this image because I find sunsets and other natural beauties of the world are often forgotten. As adults we get lost in our busy routine and forget to stop and smell the roses. Watching the sun set or rise has always been a special experience for me and a reminder to enjoy the simple things in life. That is what I was trying to communicate with this photo, the idea of all the beautiful things this world has to offer and how a camera is one of the many tools that can capture that beauty.

When I took this image I was busy doing homework all day when I glanced over and saw the stunning oranges, pinks and blues in the sky. I quickly grabbed my camera and tripod and ran outside knowing I’d only have a few minutes left of this view. I knew I wanted a silhouette of the trees and buildings framing the sunset so I moved around until I found the perfect spot. Over the course of 20 minutes the sky changed from soft pinks to dark reds and it was amazing to watch as well as view my progression of photos afterward.

This is also the photo I decided to hang in the gallery for the Photo 285 show because I consider it one of my best pieces both technically and emotionally. After staring at it for a few minutes and letting my feelings for it take over, I came up with the title “Cotton Candy Skies.” Not only does that title reflect the combination of colors but also the childlike enjoyment people get out of watching the sunset after a long week or eating sweets at a theme park.

The technical information for this image is as follows. I used my Nikon DSLR 3200 and the kit lens to capture this photo. I took this photo in late January when the sunsets were most colorful. I was shooting at a speed of 1/60 of a second and my camera was stable on a tripod. My f-stop was 4.5 and my ISO stayed low at 100. I did not have to zoom out very much so this photo was taken at 22 mm. When I took this photo into Lightroom for editing, I did not have to make very many changes. The most difficult decision was choosing my favorite of the sunset images. However, when I saw this one I knew based off of the colors and silhouettes, this was my strongest of the batch. I simply cropped it in a little tighter both on the sides and bottom to remove some distracting elements and make the overall framing of the sunset more desirable.

About the Photographer:
My name is Sunday Miller and I am a student at NAU pursing a degree in Photojournalism. Growing up, my father was my biggest inspiration since he is also a photographer. He covered our house in beautiful framed works of art, both his own and of other artists he looked up to. I prefer to capture candid moments with my camera, ones that tell a story and could never be duplicated. Within the last two years I’ve obtained a minor in photography and am a part of the student newspaper on campus called “The Lumberjack.” As an artist I hope to travel the world and photograph its beauty along the way.