Laura Jones » You Can Sleep When You're Dead: Blog by Colleen Miniuk 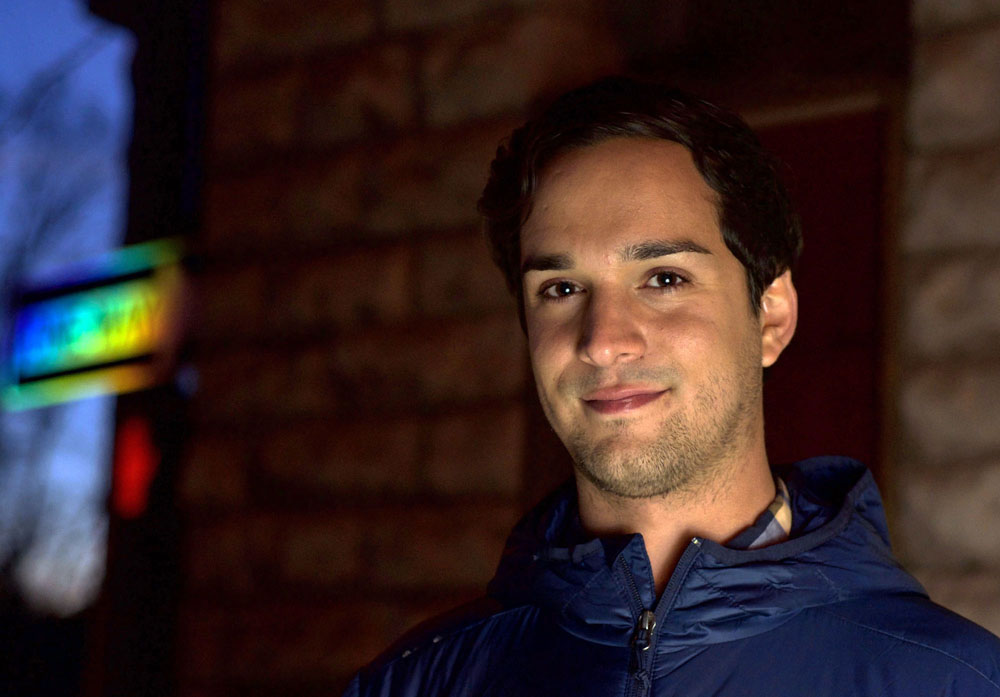 Flagstaff, Arizona is a hub for tourism, with people passing through my town on their way to Sedona or the Grand Canyon. Many stop for food, shopping, or to hang out in our quaint downtown square. Lovely as it is, San Francisco, a main street in the downtown area, is often forgotten about “south of the tracks.” There are up and coming businesses taking over the streets of south San Francisco, reviving the life on the “other” side of the tracks. My friend Sebastian works at a hair salon almost as far south on San Francisco as you can get. Not only does Sebastian have great energy and charisma, but he could be my model to show off a bit of Flagstaff many just pass by. A loud and intense drumming came from a Brazilian drumming class next door to the studio Sebastian worked. As people drove by, they would slow down to listen and watch as my tripod, umbrella, and camera added another interesting layer to the loud music everyone could hear.

I wanted to capture a portrait that was reminiscent of “street photography,” as if I grabbed a passerby and asked to take their photo. I shot at twilight, about 30 minutes after sunset, and the cool, blue light was a beautiful background for my subject. We shot next to an intersection and as cars drove by their lights reflected off the “one way,” sign hanging in the top left corner of my shot.

The cool tones of twilight looked too blue on Sebastian’s skin, so I opted for a gold umbrella to bring some of those warm tones back into the image. I made the image on my Nikon D90, which I’ve had for approximately 5 years, and my Nikkor 60mm lens, which is a newer addition to my kit. The aperture was set at f/2.8, which allowed me to capture Sebastian’s face clearly and have the background drop with blur. Every now and then, I showed Sebastian a couple images and gauged his reaction on the style I’d take. If he said something self-deprecating, I’d take different angles until the image reflected something we both liked. I’d positioned myself a bit lower than eye level with Sebastian; my lens looked up at him and his gaze was slightly down. He looked strong and confident and there was this wonderful iridescent color reflected off the “one way” sign and I knew this was my shot.

Laura is an Illinois native who moved to the arid southwest in 2011. Her photography began in a stuffy dark room in her hometown of Metamora, Illinois while she was in high school. When she progressed into digital photography, she was able to photograph more often than with film. She loves landscape photography, but aspires to capture more portrait photography that incorporates the beautiful Arizona outdoors. Laura has a degree in Fine Arts and started attending NAU to study Photography, giving her an artistic edge over other photographers. After graduating, Laura wants to open her own photography studio in Flagstaff.

To read more about the Northern Arizona University “Behind the Image: Guest Blogger” project on our blog, please read the introduction at youcansleepwhenyouredead.com/wordpress/4th-annual-northern-arizona-university-behind-the-image-guest-blogger-project.  Please take a minute to leave your thoughts and constructive comments in the Comment section below – Laura would love to hear from you!