journey » You Can Sleep When You're Dead: Blog by Colleen Miniuk 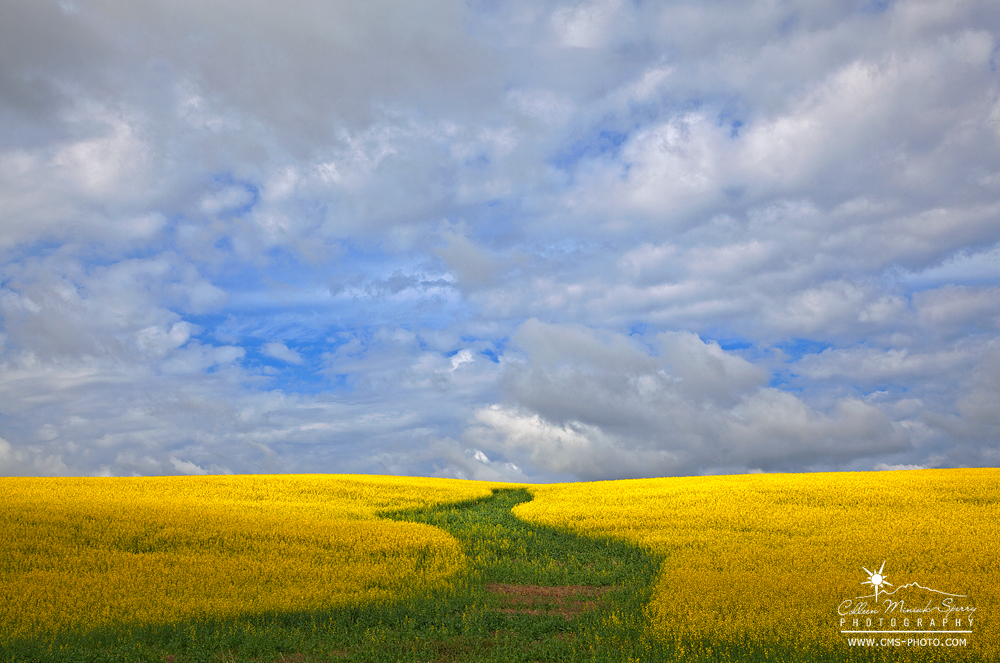 “Into the Great Wide Open” || Blooming canola field and clouds in Alberta, Canada (Prints available – click on photo to order yours!)

“The road of life twists and turns and no two directions are ever the same. Yet our lessons come from the journey, not the destination.” ~Don Williams, Jr.

Earlier this summer, while en route from my friend’s home in Calgary to Banff National Park in Alberta, Canada, my companions and I enjoyed seemingly endless views of blooming yellow canola fields along the highway.  For a closer look, namely in search for a red barn to serve as a pleasing contrast between the blue sky and yellow flowers, we turned down a random dirt country road to continue our scouting.  When we came upon this particular field while driving a dirt country road, we all agreed: we had to stop to photograph it (yes,despite no red barn)!

When I surveyed the scene, I knew immediately that I wanted to showcase the juxtaposition between the yellow flowers and the non-blooming green weave as a leading line through the frame.  To draw more attention to the contrast and to reduce the visual tension (thereby offering a greater sense of peace and harmony), I intentionally positioned the green shape in the middle of my composition and allowed even amounts of space for the yellow on either side to create a more symmetrical balance.  I also wanted to give a broader context to the path as if it were leading into this great big sky – and into a great big unknown – so I dropped the horizon towards the bottom of the frame to emphasize the expanse above the landscape.

As I perfected my composition with my 24-105 mm set at a 50mm focal length, the mid-morning sun kept playing hide and seek. One minute, the scene fell in completely diffused light.  Then, the next minute, it appeared fully illuminated. Knowing that a viewer’s eye would travel along the green (darker) area to seek the brighter part of the frame, I waited patiently for the sun to dance across only part of the field, specifically the top part, where the path ends and meets the sky.  For a mere few seconds, the sun cooperated before moving on and spotlighting a different part of the field out of my frame.

I stayed put for several more minutes, hoping this lighting effect would return to the top of the ridge, but alas, it did not, and I chose to move on to additional compositions under almost completely diffused light.  We never did find a blooming canola field with a red barn (found plenty of both, just not together!) but we enjoyed the journey to find it immensely.

When I returned home to process the image, titling it came very easy.  I named the resulting photograph after the Tom Petty and the Heartbreakers song, “Into the Great Wide Open” as that’s what I was humming while I made the image!