Joseph AL-Ruwaished » You Can Sleep When You're Dead: Blog by Colleen Miniuk 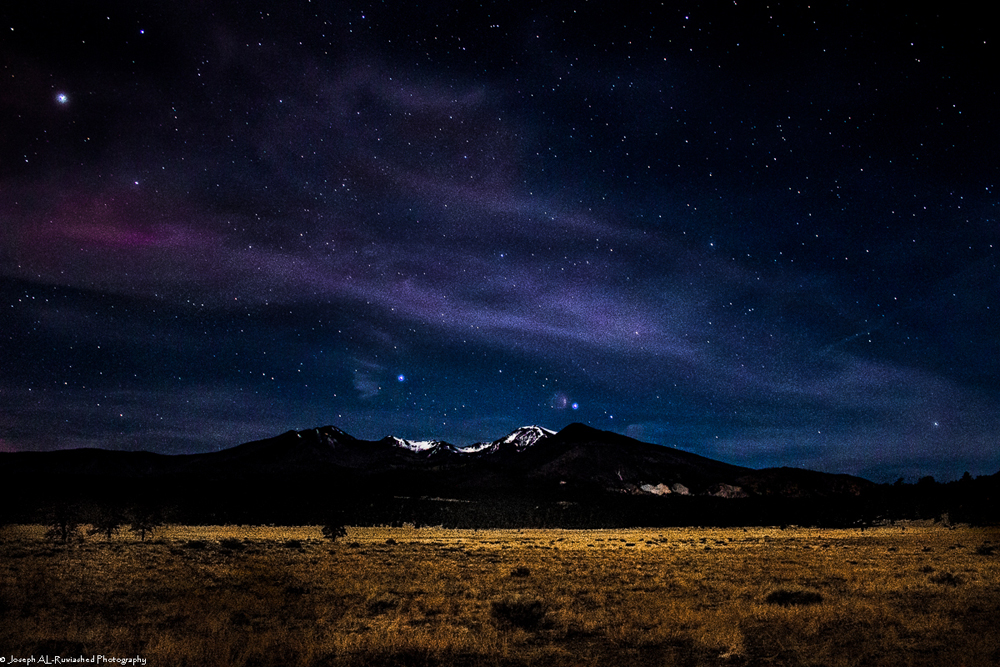 “Grungy Night Sky:”
I wanted to take photos of the stars and the night sky for some time now. I imagined a photo of a unique landscape with foreground perhaps a middle ground, and a background that was perfectly set underneath the night sky speckled with stars.  I attempted to do so in the past, and failed miserably. For this task, a long exposure is the skill required for the completed image. I set out earlier this semester and I captured a few starting point images. I made some mistakes and learned what I needed to do instead.   Here in lies the definition of working towards a goal of what one wants to have accomplished. When you have tried and failed, it is only right, that to hone skills, practice makes perfect. This image, as I called it “Grungy Night Sky,” resulted from another attempt at having the image I wanted of the night sky captured. I still, however, failed at the perfect image for what I had imagined the shot to portray. That said, this image shows the rawness of nature, and it provides the viewer with a sense of how important light is in the story of life and what it tells.

The life of a photographer when in school is nothing short of complicated, busy, and did I mention busy. It is only true that time is of the essence, and in this case specific. The night sky, for correct and best appearance, requires a night without moon light, if the stars, constellations, and Milky Way are the goal. This night, did not have a moonless presence. Nor did an absence of wind take place. I shot this photo at 4:30 am in the almost pitch black environment. The camera I used to shoot this image was a Canon T3i or 600D. I attached my 18-55 mm EF-S Lens and proceeded to set up the camera settings for the shoot. Since I took this photo in the darkness of 7200 feet in the open forest meadow that surrounds Flagstaff, I bumped the ISO up to 1600 to allow for the correct amount of light capture. An important step in this process is that for this type of photo the camera should have the setting of a more open aperture. I set my camera to F/3.5, to allow for the most light possible with the lens I used. As this photo used the skill of long exposure, I set the shutter speed to 20 seconds. I did not have a wide-angle lens that has the option to set focus to infinity. Therefore, I manually set the camera and attempted to focus on a closer object that would result in the correct hyper focal distance. As you can see, though, there is a fuzziness, which caused my title to say “Grungy.”

About the Photographer:
Among other things, the artist in me is bound to share what I believe in. That is God’s creation and individually unique moments in time that capture ones heart through the lens of a camera.  Photography in my eyes is the sharing of what one believes in. I have a strong desire to capture the moments that are masterfully pieced together and perfectly set up to reveal the beauty that has been given to us to enjoy. I prefer landscape, nature, and wildlife photography; not saying that other types does not reveal beauty.  I am interested in becoming more adept in black and white photography. Ansel Adams said it best when he said, “Sometimes I do get to places just when God’s ready to have somebody click the shutter.”