Holstee Manifest » You Can Sleep When You're Dead: Blog by Colleen Miniuk

Though I wouldn’t call myself an avid country music fan, one of my favorite artists is Paul Brandt from Calgary, Alberta, Canada.  There’s a long list of uplifting songs I thoroughly enjoy, including “Didn’t Even See the Dust,” “What I Want to Be Remembered For,” and “Alberta Bound.”  But there is one song he produced called the “Little Space Between” that always seems to tug at my heart strings.  In case you haven’t heard it, the chorus suggests:

“Get ‘er done
Get to it
Cause there’s only one time through it
There’s only one thing we’re all heading for
It goes 1972 dash then
You leave your legacy
In that little space between.”

After spending this past weekend in Montana trying to fill that “little space between” with my husband, Craig and father-in-law, John,  I was overwhelmingly stunned and saddened to hear that two friends and outstanding photographers had unexpectedly lost their lives.  Last Friday, fellow Through Each Other’s Eyes (TEOE) photographer Paul O’Neill suffered a heart attack while recovering from his second brain surgery.  On Saturday, the past President of the Himeji International Photographic Society (HIPS; TEOE’s partner organization in Japan), Taisei Kitamura lost his long battle with cancer.

I met Paul in 2006 upon becoming a member of TEOE.  From the start, Paul always was eager to listen and encouraged my involvement, usually with a broad smile and sly sense of humor (which made it hard for me to say “no” to his task requests!).  His passion for making the world a better place was evident in everything he did, as he used his talents as a photographer and videographer to help educate the community about valuing culture and valuing each other through his TEOE exchanges, his leadership role in the Lowell Elementary School project, and his grass-roots efforts to fight bullying in the community.   Our thoughts and prayers are with his wife, Margo, his two children, and his grandchild. 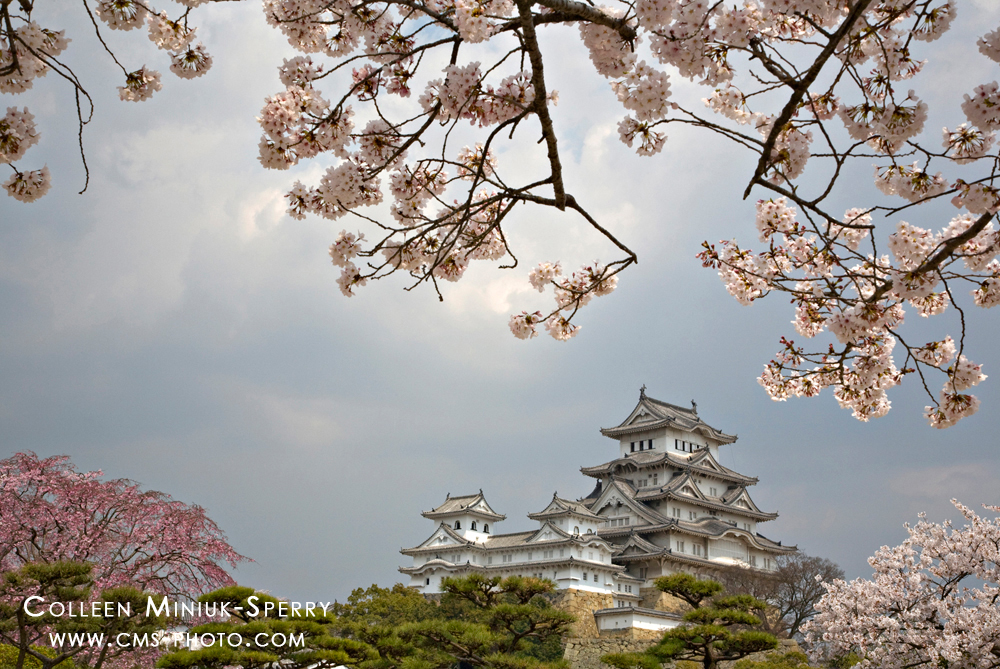 One of the photographs I captured of cherry blossoms and Himeji Castle during my 2006 TEOE exchange with Himeji, when I met Kitamura-san.

I had the pleasure of meeting Kitamura-san in 2007 during my first exchange with TEOE to Japan.  Though HIPS photographers, Itsuko Azuma and Yasushi Ienaga, generously hosted fellow TEOE photographer, Art Holeman and me during the exchange, I vividly remember meeting with Kitamura-san at his gallery in downtown Himeji where we had the chance to admire print after print and book after book of the Himeji Castle and surrounding Hyogo Prefecture.  I immediately thought, “He must certainly have THE most extensive and impressive collection of photographs of the Himeji Castle ever created!”  He had photographed this world UNSECO site, which resided conveniently down the street from his gallery, from seemingly every angle, in every season, and in every light.  May his wife and three daughters find some peace in this difficult time.

Through the tears, I find great comfort that both of these men filled their “little space between” with much joy, passion, and compassion. Both leave lasting legacies, which you can read more about in the moving tributes our TEOE President, Errol Zimmerman wrote about them:  Paul’s tribute and Kitamura-san’s tribute.

As we now celebrate their glorious lives, I find myself asking and pondering, “Am I doing all I can to fill my space between?”

Are you doing all you can?  What will you do with that space between the start and end dates of your life?  Each of us has a different path but each of us has equal opportunity to create significant individual meaning with the time we have today.  Not tomorrow.  Not next week.  Not next year.  RIGHT NOW.  Tomorrow, next week, and next year might not come.

If you’d like some ideas and inspiration, take a minute to watch this video by Holstee: (If you are unable to see the video above, please visit the link directly at http://www.youtube.com/watch?v=KSLVXt1iKCU)

Then, in celebration of Paul’s and Kitamura-san’s life, I’d encourage you to find one way – no matter how big or small – today to embrace the message it contains, “Life is short.  Live your dream.  Share your passion.”  If you care to share, we’d love to hear what you did today to fill YOUR space in between in the comments.

Rest in peace, Paul and Kitamura-san.  You’ll be missed.