Evan Atwood » You Can Sleep When You're Dead: Blog by Colleen Miniuk 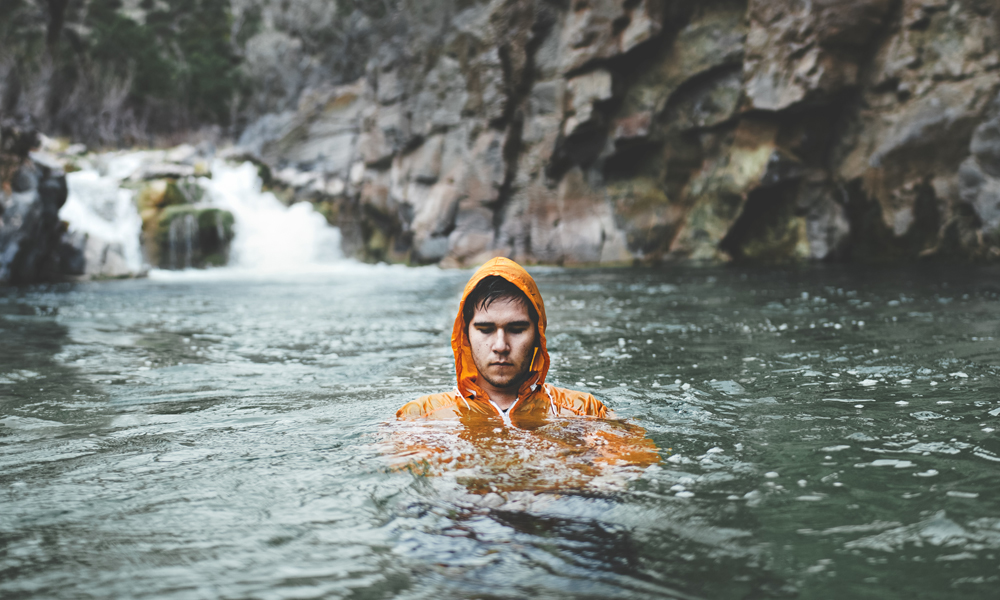 Coming from my own experience with film & media, this image was very cinematic to me. Cinematic in the sense that there is a story behind whom the subject is, the significance of the yellow jacket, and why are they in the middle of a river. The most I hope to get out of people is to know that there is some lost subject in the river. I am absolutely sure that no two people will have the same meaning by it, just as I have my own personal connection to the photo and my past experiences. I wanted to capture the shadows so that the light on the subjects face would really show. I also knew that I wanted to be in the water for this and to have the waterfall in the background. For me, however, having such a cinematic shot is exactly what I wanted and it’s exactly what I got.

I knew I would be able to capture it once I got in the water with my tripod because it was just deep enough that I could leave my camera on my tripod without being worried.  Then I took a couple of test shots, figured out what I wanted, put the drive to timer & used my remote shutter release to capture the images of myself. Since I put the remote on 2 seconds that’s how much time I had to get rid of it. Each time I put the remote in my mouth to conceal it.

I shot this with my Canon 7D, with my 30mm f1.4 lens. So the focal length was 30mm at ISO 100, 1/1600, and f1.4. I had a UV filter on my lens, but it was an overcast day so there wasn’t much use out of it other than protecting my glass. I did use special post-processing: I used the brenizer method to compose my shot of several that I took after I shot my own. This means that I shot the picture with the subject inside of the frame along with the reflection so nothing would be missing and then shot several shots around in order to have a wider shot in the end. By using different layers in Photoshop, this was easily obtainable.  Of course, one must be careful to shoot in manual mode in order to have the same settings for each shot you take. I hope that someone is able to make up their own story about what this photo means.

About the Photographer:
My name is Evan James Atwood & I am a primarily self taught photographer from New Mexico. My inspiration for photography first came through film, cinema, and music. This started when I was about 14 & it has only escaladed from there. I have since been published in a few local magazines, some photography websites, and have reached over 53,000 followers on Instagram, Flickr, and Facebook. Primarily, I am a portrait, fashion, and fine art photographer and prefer photographing people because of the amount emotion that can be captured in the most beautiful moments. I hope that my work can differ from others in technique, subject and emotion. As for the future, I hope to be able to either be a freelance commercial/magazine photographer for a multitude of ideas/subjects with a job within marketing or be able to have a stable job as a photographer.