Emily Gaudet » You Can Sleep When You're Dead: Blog by Colleen Miniuk 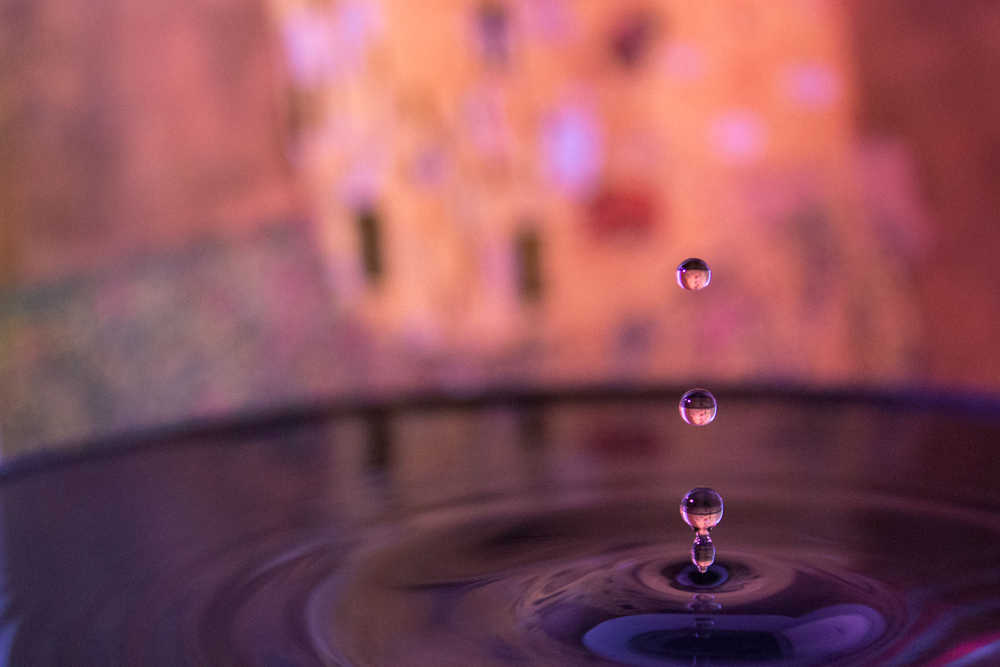 As I scrolled through ideas of high-speed liquid photography, an article caught my eye:  “Forget pop art, this is DROP ART! Amateur photographer captures amazing images of artworks – and some cartoon favorites – captured in split-second splashes of water… Israeli policeman Arik Kfir makes incredible images in his kitchen using an IV bag and a glass of water”. Mr. Kfir captures everything from the Mona Lisa to Mickey Mouse in water droplets, and his backgrounds are beautifully out of focus. I was so impressed, and I thought yes! This is what I want to try!

The set up took me at least half an hour. I used the seat of a wooden chair to fasten a baggie full of a dripping water overtop my black plastic bowl, which was on the floor. I pulled out my large Frida Kahlo book that contains all of her works of art, chose an iconic self-portrait, turned the book upside down, and placed it behind the bowl resting on the legs of the chair. I was convinced I would capture her face in a water droplet. After shooting some pictures, I found my first problem: the book was too close to the bowl. To move the bowl farther away, I also had to move the water baggie. Consequently, I made my set up even more precarious. I got a long white board and set it up like a diving board off the chair. I used something heavy to anchor it and then I fastened the baggie of dripping water to the end of the plank, which gave me about 6 inches more of space between background and bowl. I set up my external flash on the lowest possible setting and aimed it at the book. I taped two gels to the flash, one-half teal and one-half red just for fun. I felt my regular tripod was too tall, and after attempting to use my bendy pocket tripod, I resorted to hand held.  Because this assignment required manual focus, I had to place a pen across the center of the bowl to approximate where the drop would fall and adjust my lens focus there.

I could not capture what Arik Kfir captured. There were so many factors. My mind felt tired, and my body felt tired. It was not a good idea to set this up on the floor! After laying on my stomach trying to get the shot, my neck and back muscles were sore. The water droplets were nowhere near regular. The levels of the bowl versus the background image were off, so I would stack notebooks under the bowl to try to remedy the problem. There was more than one occasion where I would touch something wrong and my entire set up would collapse, splashing water on everything. The manual focus was slowing me and making it very hard to shoot more than a few pictures at a time. Finally, I gave up on Frida and I gave up on the baggie full of water. In addition, sadly, I gave up on capturing a face in a drop. My 18-55mm kit lens was not going to do it, so I focused my energies on just capturing high-speed liquid. I grabbed a dosing syringe and I chose my Gustav Klimt book, which like the Frida book has many large reproductions of his work. I chose The Kiss, because it has always been one of my favorite paintings. I remember seeing it in my parents’ bedroom growing up. The syringe gave me much more powerful drops, and I actually captured some water crowns. After about two and half hours, 600 images, having to clear my card multiple times, I took some images I love. I have amazing Frida Kahlo mess-ups.

The picture I am sharing has The Kiss in the background with a few droplets captured.  My camera’s settings were 1/200, f /5.0, 42mm and ISO 3200. The Kiss shows a man and woman in an embrace, and despite both of them encapsulated in a gold shawl, circles cover the woman’s figure and rectangles cover the man’s figure, distinguishing the two. I think the two gels on my external flash echo the duality of the painting, half the light is warm tones and half is cool tones. The droplets split in visual halves: half painting, half water. Even though I did not achieve what I originally wanted, I learned so much and got some awesome pictures.

My name is Emily Gaudet, I am an Advertising student at NAU. I spent my entire life in Phoenix, AZ. My high school did not have photo courses, so I did not discover my love for photography until college. As an extremely right-brained person with looming student loan debt, I think photography is an excellent, marketable skill to have (and not to mention fun!).  I use a Canon T5 and mainly edit on Lightroom. My goal is to create pieces that a wide variety of people will enjoy. Nature and cities interacting, humanity, and small coincidences inspire me.