Donna Kelly » You Can Sleep When You're Dead: Blog by Colleen Miniuk 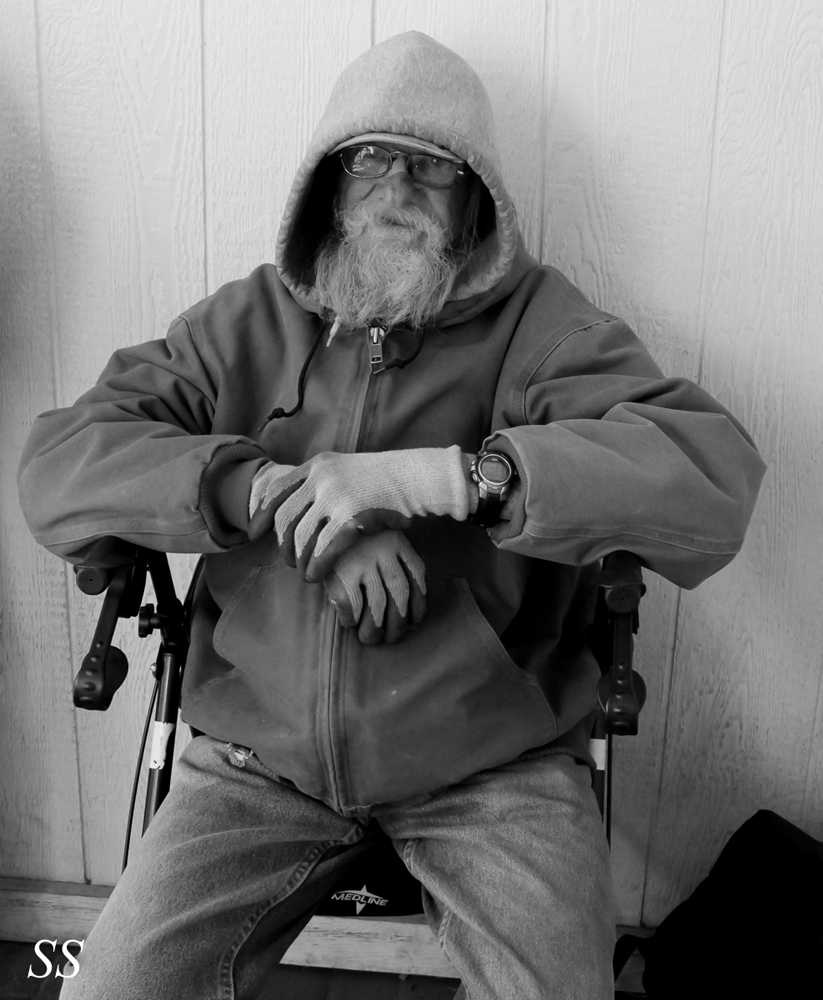 This is Rodney, and as he told me the first time I met him, Rodney is all that is necessary. At the Flagstaff Family Food Center he is referred to by the staff and other diners as Grandpa. He has huge blue eyes that are always hidden by glasses and a band aid across his nose. His legs are ruined by arthritis. His walker goes everywhere with him. When he is not pushing it, he is usually sitting on it, like in his photo here.

I am embarrassed to admit that I was scared the first time I walked into the Flagstaff Family Food Center. I was there to get content for a class, but the diners did not know that. The men waiting at the end of the line all moved out of my way and shouted to the men up front to, “move” because “ladies first.” I found out later that “ladies first” is not an actual rule of the food center. The men were just being nice. This made me sad and extremely happy all at once. Here are these guys letting the new girl get through the door first, these guys that do not know me, and have no idea that I am not there because I am hungry.

When I got through the door, one of the staff members sat me down at Grandpa’s table. She told me that they were a “lively” bunch. This meant that they would be willing to talk to me, like I knew many others would not. The first thing I noticed were Rodney’s beat up hands. They were covered in scabs and band aids. I introduced myself. The five diners introduced themselves. No one would let me take their photo, but they were all okay with me recording audio.

Since that first day I have been back numerous times. I always sit with Rodney. He has shared stories with me about his time in the army, his ex-wife, and his two daughters. His oldest daughter died in a car accident, and he has not seen his younger daughter in 16 years. After many conversations with Rodney, I offered to drive him home. He wears a bus pass around his neck, because he cannot not walk far. I trust him, but I was still nervous as we got into my Chevy Sonic. His house was less than a five minute drive away. After I dropped him off, I told him to tell me anytime I am there if he wants a ride. He smiled and thanked me and waved to the little girl who lives next door as he pushed his walker up his ramp.

Meeting Grandpa has changed my life. I know I will never forget him. He is a spiritual man, but far from religious. He believes that everything he has done in his life has been for a reason. He calls the Food Center “the best restaurant in town,” and eats there not because he cannot afford groceries but because he has a family there. He is always joking and smiling. When you meet him you automatically wonder how a man who is eating at a Food Center could be so happy. We all have something to learn from people like Rodney. He has taught me to be thankful for every single occurrence, good or bad, because in life there really are no guarantees and every occurrence shapes you and your path.

About the Photographer:
My photography and video style are very much about capturing a moment as it happens, in a way that illustrates what I am actually seeing. For me, photography and videography is art. Art is not perfect, nor should it be. I strive to capture the true moment. I believe that if a photo has to be edited to death, it was dead to begin with. I believe that everything happens for a reasons, and the some of life’s best lessons have to be learned the hard way.