Darian Gibbs » You Can Sleep When You're Dead: Blog by Colleen Miniuk 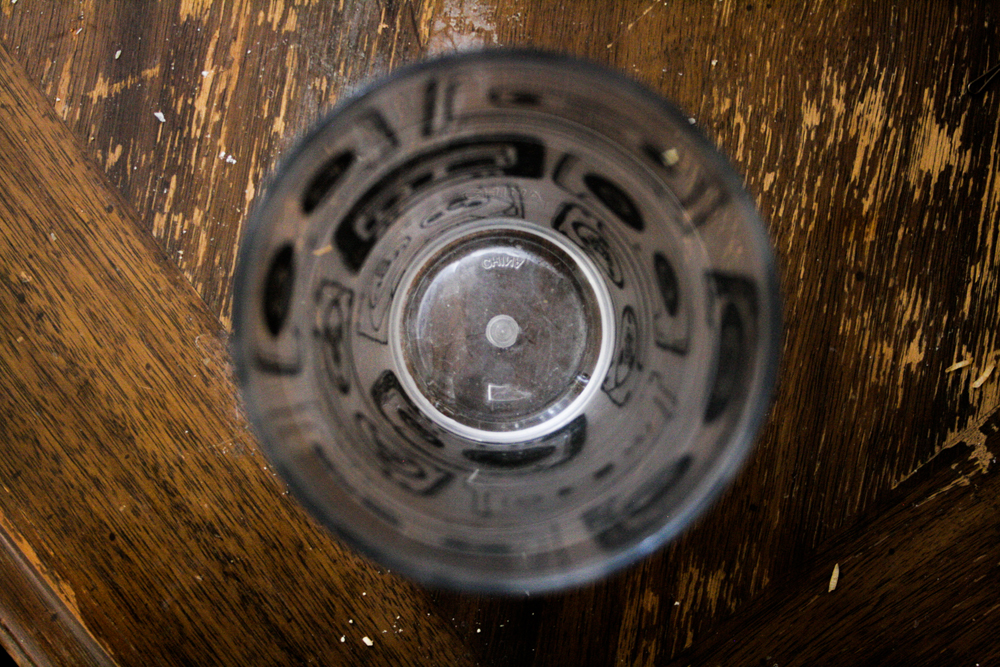 When I decided to take this photo, it was really just a spontaneous urge. I was waiting for my sister and her roommates to finish getting ready, since they wanted me to take their college senior photos for them. I was standing out in her dining room with my camera just taking pictures of items in her apartment to pass the time. I looked around and realized that the light coming in from the window next to the table was phenomenal and knew I had to use it for something, when my eyes fell on the cup I’d been using during my stay. This is actually the first shot I took of it, and I spent the next fifteen minutes trying different angles and exposures to see if I could capture something I liked better, but I couldn’t. This picture is a little bit different in composition than what I’ve taken in the past, in that it’s completely centered. I generally make an effort to remember the rule of thirds when I set up a shot, and usually end up finding that objects look better off to the side, but this one was different. I tried repeatedly to get a shot I liked better that involved the cup not centered, but not a single one looked quite right. I’m a big fan of simple yet elegant photos, which is often what I try to convey through my work, and it’s what I like to think I achieved through this shot.

The camera I used is a Canon Rebel XTi with an 18 – 55mm zoom lens. The room I was in at the time didn’t have any lights on, so the only light source was the natural light coming in from the windows in the apartment, which made getting the exposure for the picture a little difficult. I really wanted a shallow depth of field for the shot, so I got about a foot away from the top of the cup and had my camera at f/4.5. However, this left me with putting my ISO all the way up to 1600 and lowering my shutter speed to 1/15 sec in order to get the right exposure. As far as post-processing goes, I mostly brought up the contrast to get the wood of the table to pop more, and then brought up the highlights a bit. My favorite part of the picture was the nice, soft window light illuminating the cup, so I tried my best to focus on trying to accurately portray what I was seeing in person when I was applying anything to the photo.

I like to spend a lot of time outdoors, as I’m a decently active person, and I fell in love with landscapes initially as a result. Eventually what I realized that I liked about shooting landscapes was the feeling of serenity and simplicity I found in them. This led me to focusing a bit more on macro photography as well as landscape, since I find the same kind of mood created in simple, elegant shapes as it is in landscapes. I’m also a huge fan of using a shallow depth of field in my photography when shooting close up objects, because I like the sense of distance that it creates in a photo, and it’s how I imagine actually seeing something.

When I was younger, I never really envisioned myself getting very involved in photography, since it seemed to me that any good picture taken, had already been shot. How was I supposed to create something better? My outlook slowly started to change around my junior year of high school, after I’d taken a couple art classes. I began to start seeing all the beautiful sights around me, and had a ridiculously strong urge to capture them, but on paper. I wanted to draw everything I found beautiful so I could remember it. Obviously, that’s not really possible to do at any given moment, so I turned to photography as a means of preserving those beautiful moments for later when I would have a chance to recreate them, which is how I slowly got addicted to looking through a lens.

To read more about the Northern Arizona University “Behind the Image: Guest Blogger” project on our blog, please read the introduction at youcansleepwhenyouredead.com/wordpress/4th-annual-northern-arizona-university-behind-the-image-guest-blogger-project.  Please take a minute to leave your thoughts and constructive comments in the Comment section below – Darian would love to hear from you!