Anytown Arizona » You Can Sleep When You're Dead: Blog by Colleen Miniuk 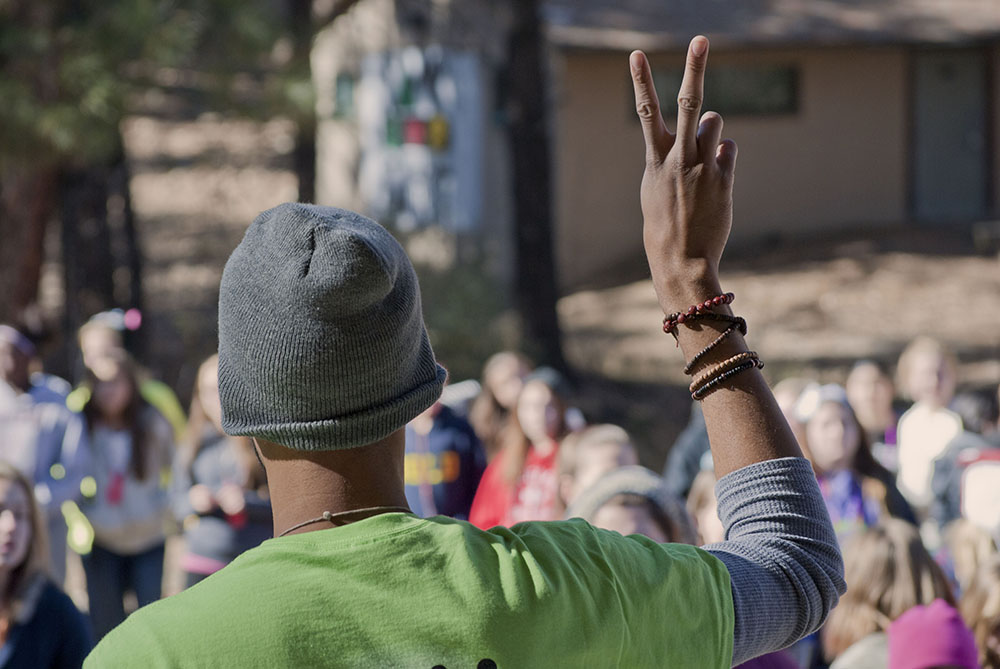 To me, this photograph says it all. It carries with it a profound message that I have come to hold dear over the years. Let me explain: In the eighth grade, I had the opportunity to attend a youth leadership camp sponsored by my middle school. The purpose of the camp was to promote tolerance, equality, social awareness, and unity. It had a noticeable impact on many of my friends and peers, but for me, the experience was life changing. I would go on to be a highly active member of Anytown Arizona, the group that facilitated the camp and countless others like it at schools and campsites around the state. To this day, I continue to volunteer as a youth leader in hopes that I may allow others the same opportunity I was so fortunate to receive.

This photo depicts a close friend and mentor of mine named Donald. He and I have worked together at a number of Anytown camps since I first became active, and I consider him one of my biggest role models. In all honesty, there wasn’t much preemptive thought on my part in order to capture this image. I simply happened to be walking around with my camera, snapping candid shots of the dozens of eighth graders, the high school and college level counseling staff, and the handful of educators serving as advisors. Suddenly Donald, the director (or head honcho) of the camp, called for the group’s attention just before gearing everyone up for the next camp activity. It was a simple gesture, really—one that occurred numerous times throughout the weekend-long camp located in the pines of Prescott, Arizona: the universal peace sign, at camp used to gather the other campers and ask for quiet in a friendly manner. I was fortunate enough to capture this seemingly routine moment and preserve it. As I previously stated, the image says it all. Personally, Donald’s all-too-familiar pose epitomizes everything I have worked for and grown to love over the past seven years of my life. In this simple moment, I witnessed not only my own inner growth, but the growth of the thousands of young adults I have had the pleasure of working with towards a common goal: a better world for all of its inhabitants.

For this shot, I used a Nikon D3000 DSLR with a 50-200mm zoom lens at a focal length of 105mm. The shutter speed was set at 1/200s and the aperture at f/8 with a speed rating of ISO 100. The final image is slightly warmer than the original file. Also, I adjusted the contrast and clarity a bit.

About the Photographer:
Quinn Tucker is a Phoenix native currently attending Northern Arizona University in Flagstaff. He is majoring in Electronic Media and Film with minors in Spanish and Photography. He has taken photos for several of his friends’ live music shows around Flagstaff and has done some freelance work for the IDEA Research Lab on campus. He likes to shoot live music, as well as abstract, macro, fine art, and street photography; often using shallow depth of field and bokeh to enhance his images. As an artist, Quinn is inspired by nature, people, travel, and cinema. He aspires to be a both a successful film writer-director and photographer.