Nolan » You Can Sleep When You're Dead: Blog by Colleen Miniuk 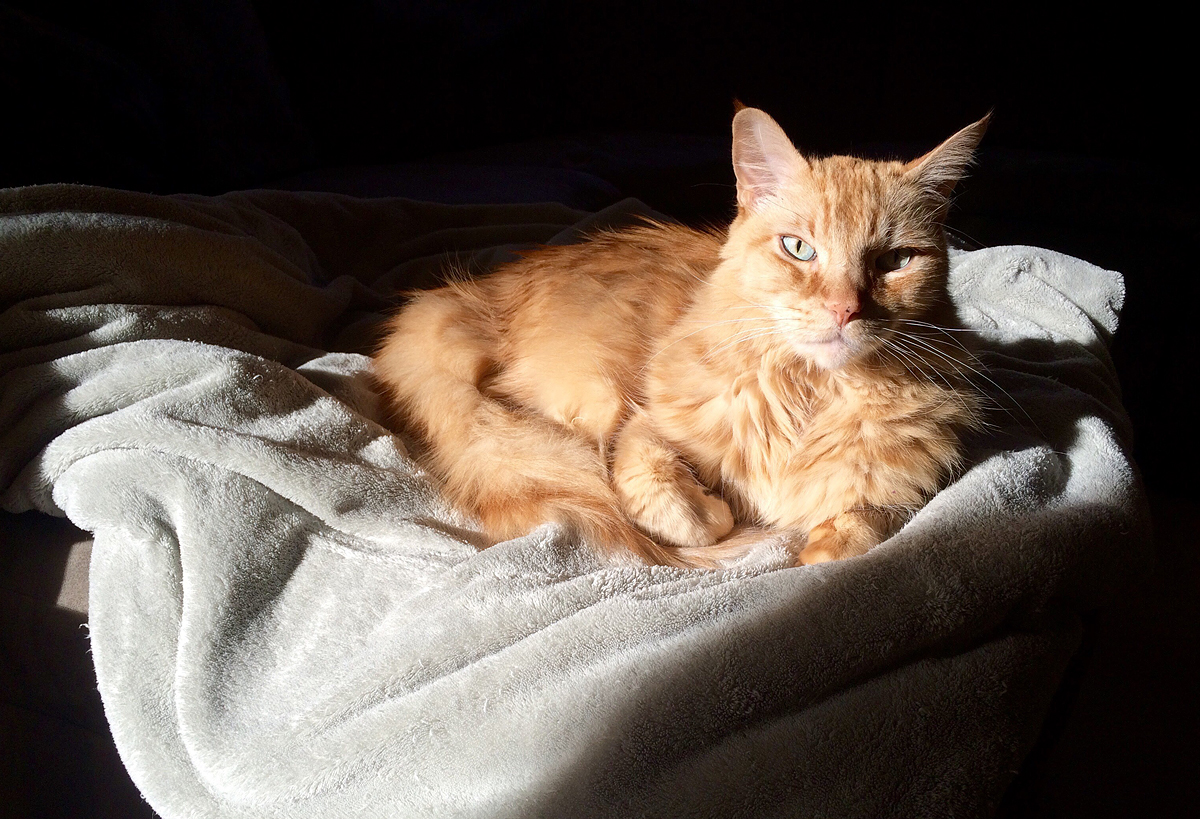 He became finicky with his food about five weeks ago, and not surprisingly, started losing weight. I found new foods he liked, though, and he seemed to be on the mend. When I left a week and a half ago for my last trip, he was eating, drinking, peeing, pooping, sleeping, running up and down the stairs, and swatting at furry toys, maybe a little slower than normal, but just fine for a ~15.5 year old cat.

My parents looked after him every other day for me and noticed a dramatic change on Thursday. He was lethargic and barely responsive. I made the first appointment with a vet I could—Saturday at 8 a.m.

Friday evening, I flew home and stayed up all night holding him. He ate chicken, ice cream, tuna, and the chicken treats he loved while listening to Norah Jones. (Oh how he LOVED Norah!) I carried him from room to room, sharing my favorite memories of him in each. I scratched his chin. I brushed him. I laid him in front of the screen door (his “Kitty TV”) so he could watch the birds and lizards in the backyard as the sun rose. I told him all the ways I loved him, specifically how grateful I was for helping me get through the last few difficult years. He purred weakly. I told him he was the handsomest cat in the multi-verse. He meowed. He’s King Nolan, he already knew that!

The vet knew immediately, cancer. It had eaten through his left jawbone which had erupted into an abscess in his mouth. The cancer likely surfaced five weeks ago when he stopped eating his regular food. The abscess likely occurred on Wednesday or Thursday. We hadn’t noticed the lump in his cheek nor his awful breath until Friday night–and we had been closely watching him for any signs of pain. The doctor confirmed there was nothing I could do to save him or provide a quality life.

Although I never thought I could bring myself to euthanize a pet, I made the difficult choice to end Nolan’s suffering. He died in my arms listening to “Sunrise” by Norah Jones, his favorite song, and with me looking into his eyes repeating with a smile, “Mama loves you. Thank you for sharing this life with me.”

I have no words to describe the pain of losing him, especially after such a rapid decline, but I hope he’s “up there” stuffing his face with an endless buffet of chicken and teaching all the other cats (including my childhood ones, Burton, Ladybug, Gizmo, and Kitty) how to turbo purr. Since we picked him out as a RESCUE in September 2013, he brought me much joy, many laughs, and lots of cuddles. My life was, and is, better because of him.

Play in Peace, my sweet Nolan. Mama loves you and misses you so very much.