Day 3: The Black and White Challenge: “The Network” » You Can Sleep When You're Dead: Blog by Colleen Miniuk 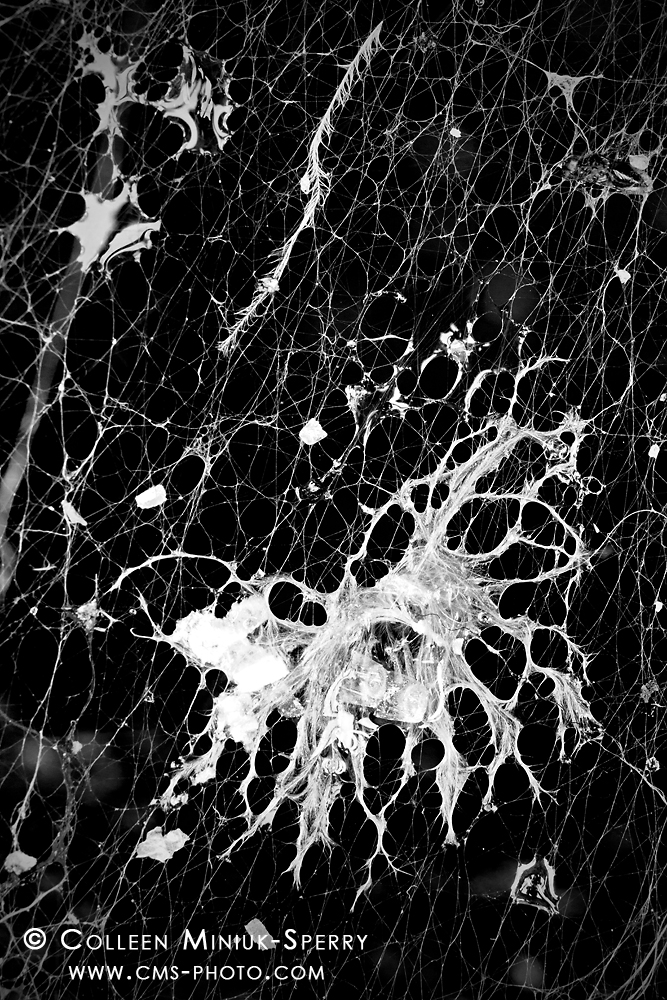 Day 3: “The Network.” Feathers, water droplets, and other materials float in a spider’s web on Schoodic Point on the Schoodic Peninsula in Acadia National Park, Maine (Prints available for purchase – click on photo to order yours!)

For Day 3 of 5 in the Facebook Black and White Challenge, I am excited to share a new abstract piece (above) titled, “The Network” from the Schoodic Point on the Schoodic Peninsula in Acadia National Park, Maine.

Amidst a whirlwind schedule of book signings and presentations in Acadia this past August, I managed to escape to Schoodic Point for an afternoon of revitalization and refreshment.  With no intentions or expectations of photographing, I simply strolled along the strikingly beautiful pink granite ledges at one of the park’s most scenic overlooks.

Having visited the point likely 60-70 times over the last four years, I continue to find scenes and things that amaze me–from the gi-normous waves explosively greeting the Maine coast to the way the granite and basalt dikes intertwine.  I never know from trip to trip whether the landscape or the smaller details will be the first to reach out and grab my soul.  Either way, Schoodic Point seems to speak to me every time I come to say hello.

On this particular visit, one minute I was watching the waves in quiet reverie.  The next minute, as I turned my head away and spotted a small spider web strung across the boulders, I lost my mind, “OH MY GAWD, HOW AMAZING IS THAT?!!”

I rushed to the granite overhang to investigate my flash of perception more closely.  With my camera still in my backpack, I approached this 3-foot by 1-foot area with curiosity, appreciation, and admiration.  Truth be told (and perhaps not surprisingly, given my “air bubble” obsession), I was first draw to the water droplets suspended in between the threads (on the top right in the photo below).  The longer I studied this arrangement, though, the more I connected with a large clump of unidentifiable material in between the feathers.  Was it decaying feathers?  Fur from an animal?  A dead animal?  When the creative flow hits, you do not ask many questions.  You go with the flow–which is exactly what I did as I set my equipment up to make an image. 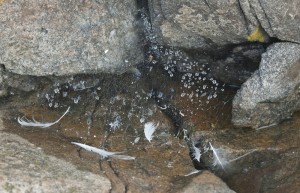 The scene of the scene: a spider web strewn across the granite boulders at Schoodic Point. Had I picked my camera up and snapped immediately after having a flash of perception, this would have been the photographed that resulted. Instead of grabbing a camera, I investigated the scene and ask over and over, “What is it that I love about this scene.” This yielded a more focused, more meaningful image of the cluster of tangles in between the large three feathers on the left.

To get a closer perspective, I reversed the center column on tripod such that my camera dangled upside down.  With a macro and two extension tubes stacked, I knew my abilities to record anything but a ridiculously shallow depth of field would be tough.  So I positioned my lens parallel to my primary subject to maximize the appearance of focus across my frame. The setting sun grazed the boulders, so I placed my rain jacket across two of the tripod’s legs to help create a larger shadow (and block the wind) across my scene.

Given the coastal breeze, I made an “insurance shot” at ISO 640 using f/6.3 at 1/25th second.  I knew this frame would not render the depth of field I needed, but would allow me to freeze the moving web during the exposure.  I also knew it would yield a sufficient enough shot to give me the freedom to push my settings slower and try to expand my depth of field in additional frames without the risk of going home empty-handed (or with a bunch of blurry images on my memory card).

I dropped my ISO to 400 and stopped down to f/9, which resulted in a 1/4 second shutter speed.   With each lull in the wind, I snapped away on continuous shoot mode (a.k.a. “machine gun” mode) as the web danced in the afternoon winds.  After making a few series and reviewing the images on the camera’s LCD, I felt I had successfully recorded the photograph as I envisioned.  Here’s the original color photograph (post continues after photo):

The color original of “The Network” (Prints available for purchase – click on photo to order yours!)

However, when I began editing my images at home in Arizona, I liked the end result; surprisingly, I did not love the end result.  The reason(s) why alluded me.  I mean, everything seemingly fell into place when I photographed the web: I had passion about my subject.  I took ample time to develop a visualization of what my end results would look like.  I filled the frame with my subject.  I arranged the various elements to achieve asymmetrical balance.  Conditions provided conducive lighting.  My depth of field rendered an adequate amount of sharpness for the subject while blurring the background.  It was close, but not perfect.  I set the image aside.

Oftentimes, it helps to create distance between you and a problem as this allows you to collect new ideas and gain fresh perspectives in order to solve them.  When Floris van Breugel nominated me for the Black and White Challenge in late October, this image immediately popped into my head.  The monochromatic direction gave me just the boost I needed – a new idea to try!

I converted the image to black and white, and instantly my photograph became as creepy and weird and abstract as I saw on the granite ledges that August afternoon.  I originally believed the color background added to the chaos.  And in many ways, it does.  But when I dropped the color out, my vision for this scene finally came to life.  Now I love the end result!

Do you agree?  What differences do you see between the color and monochrome versions?  I’d enjoy hearing your thoughts in the Comments section below.

Since I have shared an image from Acadia National Park, I would like to nominate my good buddy, talented photographer, and best-selling author, Bob Thayer, to participate in the Black and White Challenge!  (If you have ever visited a gift shop near Acadia, you have no doubt seen his awesome books, “The Park Loop Road” and  “Acadia’s Carriage Roads.”)

On Monday, I’ll share Day 4’s photograph.  Have a great weekend, everyone!

One Response to “Day 3: The Black and White Challenge: “The Network””