Behind the Image: NAU Guest Blogger – Miguel Alvarez » You Can Sleep When You're Dead: Blog by Colleen Miniuk 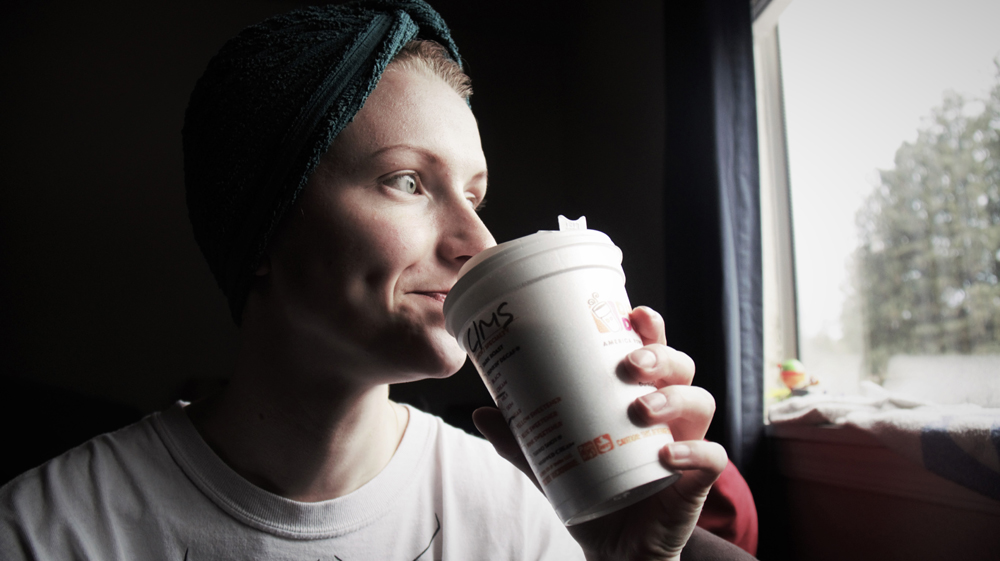 The image portrayed is mainly told through its candid imagery. A girl sits by her window looking outside with a towel wrapped around her head after she sips her warm coffee. I didn’t want to stage her emotion, I wanted it to feel natural as if the image was a mere freeze frame of her motion through her hands and face. It had been a cold day outside, thus the desaturated overall illustration of inside the apartment complimented the weather outside. Also the heightened highlights juxtapose the sunlight that’s trying to pierce through the clouds on the outside. With all of this in mind, I wanted the scenery to be a calm one by not overcomplicating what was in the frame and just be a simple shot of the girl and the window as the main subjects.

I love human interaction and their emotions to their surroundings. This image represents a piece of life, and with the natural lighting it develops a raw scene that surrounds the girl, the window, and her thoughts. Simple human interactions are easily relatable. And with this image, what isn’t so relatable about having a sip of coffee while in a deep state of mind? When I’m trying to come up with a story for one of my film projects, I limit distractions and only spend time with my imagination. Having that deep state of mind, she could be thinking about anything, about a positive or negative thought. She’s neither smiling nor directly frowning, which opens the wide range of emotions. She opens her mind by looking out the window to expose her mindset in broad way because of how the open world incites different feelings and thoughts.

I shot this image on a Canon 70D, 1/200 shutter speed, 3.5 aperture, 18 mm lens, and an ISO of 800. I’m also big on filmmaking and I typically use the same lens and camera, and the only difference from past images and this one was that I usually increase the saturation for photos and with film I color grade by desaturating the image. In effect, I desaturated this image as if to resemble a freeze frame of a film locked in a drama genre. I would also include a letterbox (the black bars on the top and bottom of the frame) but that would be too close in mended as a part of a film. This image should stand on its own with the possibility of being part of a film but still framed up as a standalone.

Raised in the suburbs of San Bernardino, California, I completed many AP and Honors courses and graduated at the top ten-percent of my class. As a result of this, I’ve been too deep into my classwork to prove my worth. I always enjoyed drawing and storytelling through comics that got me into becoming passionate with filmmaking half way into my middle school career. During my second year of college, I took my first photography class. With filmmaking, there’s an expanded way of storytelling, whereas photography you must capture an entire world and its backstory within one image. The fact that I love storytelling allowed me explore the subjects that I want to tell stories from. I’ve grown to know that human experiences/interactions is what intrigues me the most. That’s what inspires me: to tell others’ stories, including my own. What separates me from others is that I enjoy both bright and dark themes. I’ve come to know that both contrasting emotions sparks one another and they can’t simply live or portray without the other being present.

To read more about the Northern Arizona University “Behind the Image: Guest Blogger” project on our blog, please read the introduction at youcansleepwhenyouredead.com/wordpress/4th-annual-northern-arizona-university-behind-the-image-guest-blogger-project.  Please take a minute to leave your thoughts and constructive comments in the Comment section below – Miguel would love to hear from you!