Behind the Image: NAU Guest Blogger – Daniel Riebe » You Can Sleep When You're Dead: Blog by Colleen Miniuk 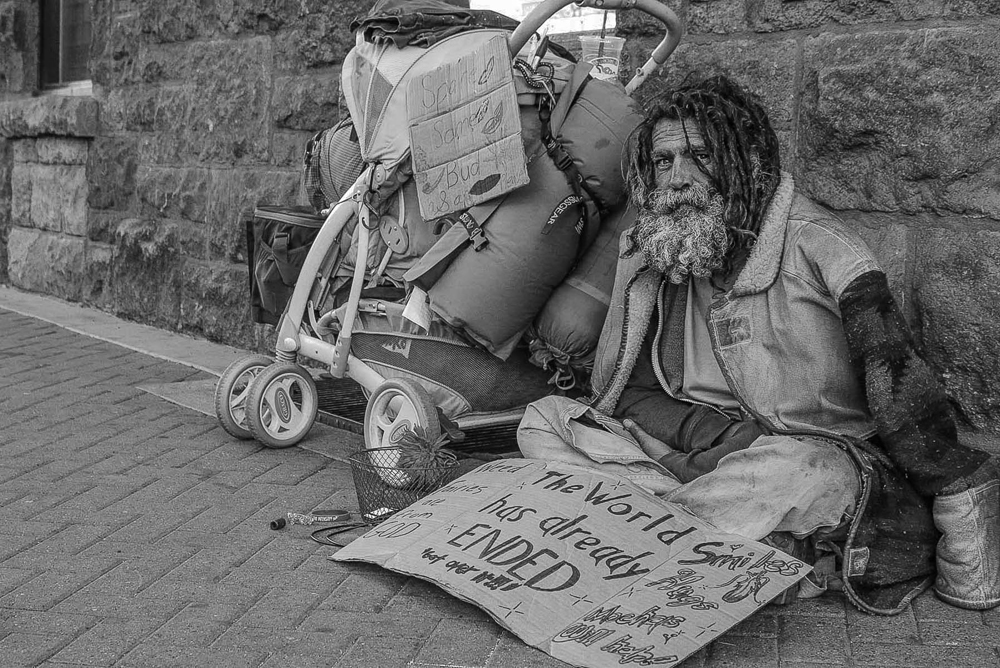 Every image captivates a story. Whether significant or not, each story brings the audience closer to the photograph. The story told through this image allows the audience to understand more about the person and the specific background. Along with the story behind the image I want to present the man’s story as well.  His name is Caveman. He’s a homeless man from Flagstaff, Arizona with a life that incorporates a very particular mindset of thoughts.

This story began with a downtown Flagstaff exploration while I looked for that image that would leave me in peace. I shot a couple photos of strangers while I explained to them my reason to why their photo had been taken that day, I had yet to take a photo which would allow for the completion of the portrait shot.

A couple of relationship shots, teenagers that had hung out together that day and of course the employee shot of a hard days work simply had not been the type of image I had in mind. I had been on the look for a different perspective of how individuals see the world. The day had slowly started to come to an end and I had been disappointed in the shots I found, to say the least. As I walked back to my vehicle I had felt defeated, with the mindset of the day to be over.

Suddenly, an individual that I had not seen earlier was perched directly in front of me with a very peculiar name, Caveman. His stern look seemed questionable whether to go talk to him or not but he had hand written signs that intrigued me. I walked up to this man, introduced myself and started a conversation that went further then I had expected.

One of the most kind, gentle and extremely enthusiastic individuals I had ever met in my life, Caveman told me stories I would have never believed I would ever had heard. The best part of this individual had been to learn about his ideas that a majority in the world would believe are insane. This man had a life with a house and a job to pay for it and one day had been tired of it all and dedicated himself to be on his own with his old life left as memories. He had a different ideology on the behalf of illegal substances, which he now had revolved most of his life around.

This however had been the most intriguing part about him. The belief that one-day he would be taken up, by what he called “the weed fairies”, which allowed him to be in a different world. This photo represents a different perspective on life. The story applies a specific outlook for people to look back on there own life.

On the mechanical side I used a Canon 70d and an 18-55mm lens. The black and white photo emphasizes contrast which provides more emotion to the photo.

About the Photographer:
I have personally found that the ability to capture a fleeting scene in order to depict its story is why photography has become so important to me. It is also humbling to think that each and every moment, which I choose to capture, is an image that testifies to my interests and passions. If you would like to know what I enjoy, cherish, and respect, look at my work, what I document, and choose to share for others to see.

My work consists of proposal and engagement photos while being able to sell my photographs to those who show interest. I prefer subjects that are not going to move around. Subjects that sit still and have me move to the specific angle I need for the perfect photograph.

Have you ever stopped and stared at something for a considerable amount of time; wishing that you could physically hold on to the image that you are currently tantalized with? The beauty of photography is that it allows an artist to express those moments that would otherwise remain nothing more than a memory for any who were there to witness it.

It is my goal to continue on this path, and further my ability to express myself.  Truthfully, it is astounding to think that a hobby I have has also become my voice and my way to display how I see our world!

3 Responses to “Behind the Image: NAU Guest Blogger – Daniel Riebe”