Behind the Image: NAU Guest Blogger – Allison Jourden » You Can Sleep When You're Dead: Blog by Colleen Miniuk 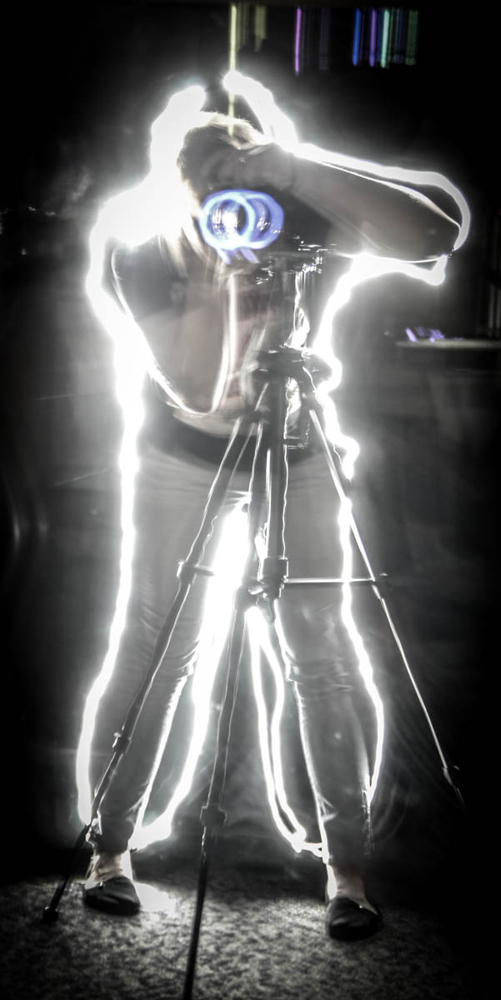 When assigned to my photography class, this project bore the name “Painting with Light.” Earlier in class, my instructor dazzled the class with beautiful images taken by photographers that danced with a source of light in their frames while taking images of multiple second exposures. The effect I found breath-taking.

When my turn came to breakout the artists brush and dip it in a little light, I struggled. I found the hurdles of getting my camera settings right often took up most of my shooting time. Having taken dozens of images, many blurred, or my friend attempting to blindly draw cool designs in the air and seeing close to no success, I quickly became disheartened and quite frustrated.

Initially I had chosen an outdoors location to shoot this photo. My friend and I met in a rather-trafficked area of campus – one of which I would have considered very dimly lit, until trying to use it as a location to take this photo. Eventually, we moved to an indoors location, as I found avoiding the yellow glow of campus lights impossible. Dorm living limits photographers on the available space to take intricate photos, neither mine nor my friend’s room was big enough to get anything done, so we met in our resident hall exercise room.

I had purchased and was excited to use glow sticks for this project – I thought I could achieve something epic – so as soon as we got in the room we began suspending them from walls and taping them together, hoping to construct some cool device that would look incredible when moved in front of a camera for 30 seconds. Again, this was to no avail.

I was ready to give up. How could all of those images I saw on Google have such clean and beautiful lines of light seemingly put in all the perfect places to illuminate only intended areas of the images? Why weren’t any of mine working out the way I was picturing them in my head? Why had I left this damned assignment until the night before it’s due and given myself no room for error?

I remember sitting. I told my friend I was going to take a break and that I didn’t know what I was going to do next. I proceeded to plant myself on the floor. I was ready for the mother of all sulks. Just then, I looked around. What was I missing? Something I hadn’t noticed before all of a sudden jumped out at me, making me feel like a dummy for not realizing its potential initially. One of the walls in this room was covered in mirrors. Yes! This was that extra element I felt all of my other images had been lacking.

Quickly, I set up my tripod and camera to face the wall of mirrors. I armed my friend with my flashlight while leaving some of the glow sticks still hung from a wall behind us. I told her that when I said go, to trace my body with the light. She did so and we only had to do this once. The result is the image above.

About the Photographer:
“If you always do what you love, you’ll never work a day in your life” – My Dad.

My name is Allison Jourden and I study photography at Northern Arizona University. Growing up, I seemed to always have a camera in my hand. I enjoy memories – there was always something about capturing moments in time to be remembered in the future that always pulled me towards photography. In school, I was always very academic. When it came time to start thinking about college and choosing a major, the thought of going in to photography as a profession terrified me. What if I wasn’t good enough? How was I going to make enough money to support myself? Would I be happy? In the end, that quote by my dad is what pulled it all together for me. I finally believed that if I spent my time doing something that made me happy, everything else would just fall in to place. So far, it has.