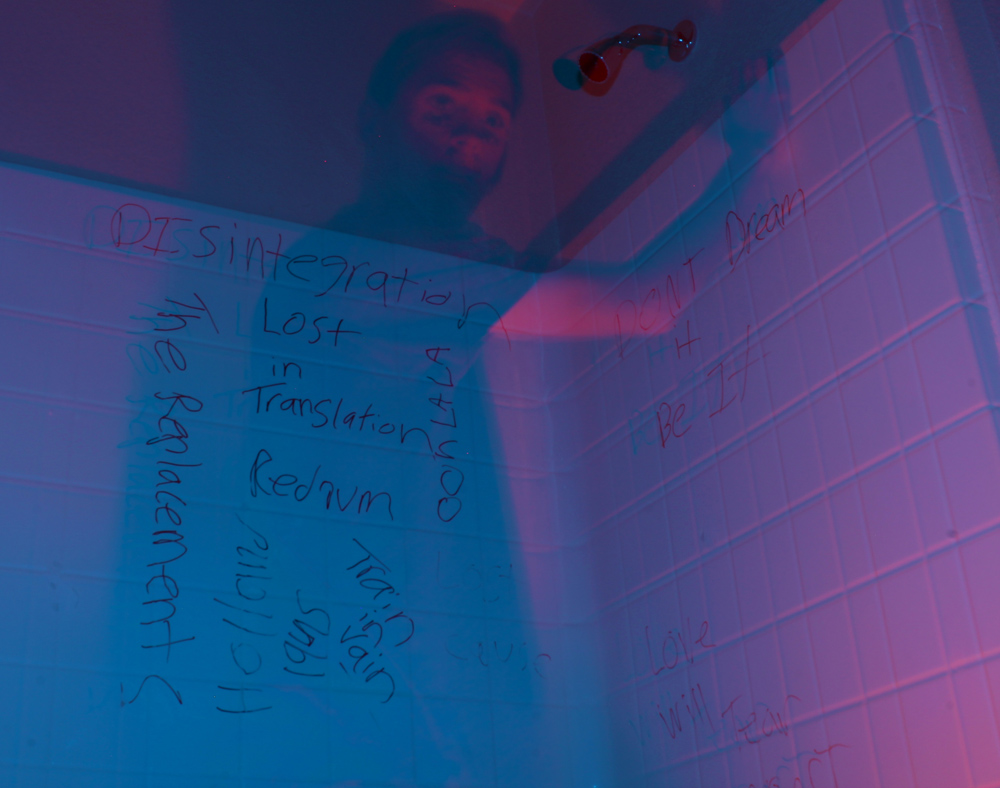 When most people take photos they just point and shoot the camera. Very little thought goes into the process of capturing the image.  As those of us who have taken a photo class or have done any professional work know, there is a lot more that goes into an image. There are some times when you plan the image out and it only takes a few minutes. There, however, are other times were you spend a considerable amount of time trying to figure out how to capture the vision you see in your head.  This was the case for myself with this image.

This image came about from a night of complete boredom, and a week of mild depression. What was funny is that I was pretty happy at the time of taking the image. It gave me a creative outlet to express some of the things that I was too embarrassed to admit out loud to those around me. I think there is some beauty in that. This is the first time I have shared this image with anyone. I had aspirations to share it on social media but I was afraid of what some might have thought, or that some would have over reacted to something that was nothing more than a creative outlet.

Going about creating this image is one of the hardest things I have to do with a camera. This had to do with the fact that I had zero help in almost every aspect of the image, which only makes its all the more personal for myself. I had set up a tripod in my bathroom (how many times have you heard that phrase said, it can’t be many) and a hot shoe flash with a receiver set up pointed at a reflector angled at my shower. This was the basic set up but it was everything else that I added that made this shot rather difficult. I had set the shutter speed at 20 seconds in order to allow myself to accomplish everything I had to do.  I put a red fill onto the hot shoe flash while I added a blue one to a flash I had borrowed from a friend attached to my camera. Since I only had one receiver I had to manually hit the shutter button which set off the blue flash and then I would have to move around the tripod in the dark to get into the shower. After I was in the shower I had the trigger in hand and flashed the red flash several times to try and offset how strong the blue flash was. Initially with this image I had the idea to turn the water on as I thought that having the flash stopping the water while adding color would look cool. I was right about that, but I was very wrong on how easy it would be. Electronics and water do not mix. While my flash was not in the shower it was still susceptible to over spray and it promptly started to spasm and freak out. This was the only time I tried it with the water, but I do want to try it again sometime.

I took many different shots when trying to capture this image but this is the one I settled on. It was very hard with a twenty second shutter to have enough light on myself actually stand out. This was the one that I turned out best in. Having just a basic red light that I could turn on and off would have worked better. Is this the perfect image? Not by a longshot but it something I am actually pretty proud of. This is because of the personal nature of it. It would have been nice to have help taking the image but in doing it alone it made taking the image very therapeutic. This was a hard image to take, but one that I had a good time making and if I can get this much joy out of making other photos in the future then I’ll be happy.

Robert Tyler Walker grew up living in Santa Ana, California before deciding to attend in the fall of 2012 Northern Arizona University where he majors in Journalism and is minoring in business, and creative media and film. He has interned in the Senate Press Gallery in Washington D.C. and one day hopes to be a travel writer. In the mean time he likes to go exploring with friends, camera always in tow.

To read more about the Northern Arizona University “Behind the Image: Guest Blogger” project on our blog, please read the introduction at youcansleepwhenyouredead.com/wordpress/4th-annual-northern-arizona-university-behind-the-image-guest-blogger-project.  Please take a minute to leave your thoughts and constructive comments in the Comment section below – Tyler would love to hear from you!