Last February, I presented at the Out of Yosemite conference. I had turned down the offer to be an instructor there twice. I had only visited Yosemite once before (for a dear friend’s wedding) and had never photographed there before. I didn’t feel like I belonged. After some cajoling by the Out of Chicago staff, I finally agreed. And my life, unknowingly at the time, was forever changed.

(Let the remainder of this story be a lesson in saying YES!)

While there, I happened to meet Jeanne Falk Adams, Ansel Adams’ daughter-in-law (and later, Michael, Ansel’s son). Jeanne attended my three-hour Visualization session where we struck up a conversation about water-related topics—rafting, paddling, oceans, rivers, etc. After my gig, she invited me to participate in an upcoming exhibition she was in the process of curating called “Vital Waters” for the Sangre de Cristo Arts Center in Pueblo, CO. It featured ocean-related works by Ansel Adams, Ernie Brooks, Scott Campbell, Dorothy Kerper Monnelly, Chuck Davis, Camille Lenore, and Robin Robinson. She had been looking for one last photographer to add to this line-up. There was only one problem: that show would feature only black & white photographs. I work almost exclusively in color…

When she asked me if I worked in black and white, I said, “I can if it means I can be a part of this show!!!”

Instead of changing who I was as an artist, my style, and my focus, we came up with a new idea. I was to have my own separate solo exhibit in the foyer leading into the “Vital Waters” hall. We called it “The Current Flows: Water in the Arid West.” It included 16 of my photographs—in color!—focused on the Colorado River watershed. In preparing for the show, I wrote captions that were too long to fit on the wall (a surprise to no one…)–and we realized not everyone would be able to get to Pueblo to see the show–so we created an exhibit catalogue for “The Current Flows” that contains the 16 photographs, expanded captions, and a Foreword by Jeanne.

Just over a week ago, I had the great honor of participating in the opening festivities for the complimentary shows “Vital Waters” and “The Current Flows.” It was a whirlwind of joy, gratitude, celebration, and new friendships. When I climbed up the last of the third story steps and saw my images on the wall for the first time, I teared up. I can’t thank everyone who played a role in making all this come together. It truly was and is the privilege and thrill of a lifetime.

To see some “happy snaps” from Friday’s opening gala and Saturday’s “Coffee Talk” with Jeanne Falk Adams, visit the exhibit website: www.thecurrentflows.com and select the Exhibition Photos tab. (For those who know the background on “cyan,” notice the wall color. That wasn’t my doing! The arts center picked that paint color out without me knowing. Gotta love the Universe!) From the website, you can get to recommended books, river guiding outfitters, and other resources for getting involved and becoming part of the flow.

Both shows run through January 2022. If you are in the Pueblo area—or need an excuse to make a road trip—check out both shows on the 3rd floor. (They take up the entire 3rd floor.) In addition, swing by the 2nd floor to see Ansel’s Polaroid Teaching Panels—which have never been on display to the public before.

Then mark your calendar for 11 am on July 31, 2021! I’ll be giving a “Coffee Talk” for my exhibit at the Sangre de Cristo Arts and Conference Center in Pueblo, CO. It’s FREE to the public. You’re all invited!

If you can’t make it out there, grab an exhibit catalogue (available in print and eBook formats) to bring the show to you. I’m donating a portion of the proceeds from the sales of this catalogue to the Sangre de Cristo Arts and Conference Center to support their programming and to American Rivers.

For the love of the River! 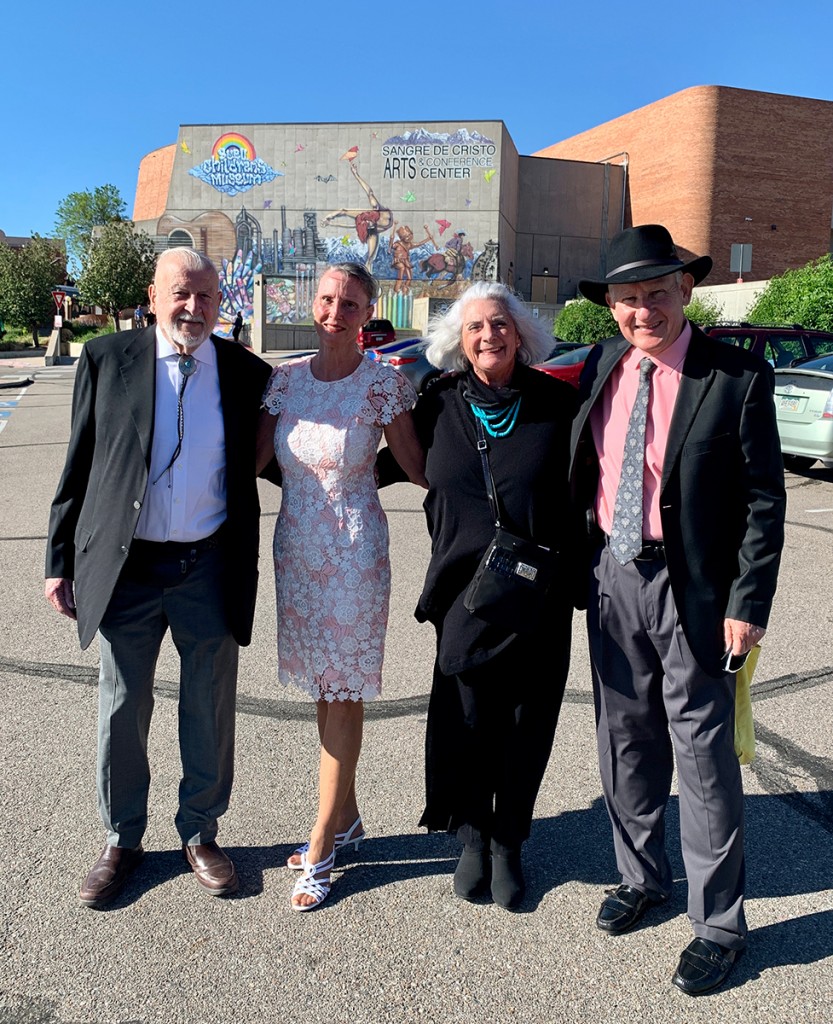 Michael Adams (Ansel’s son), Jacque Miniuk (my mom), Jeanne Falk Adams (exhibit curator and Michael’s wife), and Bob Miniuk (my dad) pose in front of the Sangre de Cristo Arts and Conference Center before the opening gala on June 4, 2021. Never in my wildest dreams did I ever think I or my parents would ever meet Ansel Adams’ family nor have my photographs in a solo exhibit on water (I used to be terrified of water where I couldn’t see my feet!). But here we are…you just never know where the river of life will take you. So long as you keep saying YES!